Most models are coming together to say south Texas will be impacted in a direct hit fashion but effects will be felt in some areas more north. That's is more up in the air though.
You can see all information on Don by clicking below on the label Tropical Storm Don or clicking on the image at the top of the page called 'Track The Storm'.
By Andrew at 9:36 PM No comments:

Totals from Tropical Storm Don are going to be pretty high, up to 4 inches in a line in South Texas.
You can see all other information on Don by checking out the label below called Tropical Storm Don, or click the image at the top of the page saying 'track the storm'.
By Andrew at 9:34 PM No comments:

A mesoscale discussion was issued by the Storm Prediction Center this evening for portions of North Illinois, North Missouri and Southeast Iowa. The discussion made mention of how there was an increasing severe risk through early evening. The discussion above was valid until just after 7 pm CDT. The discussion expired on time. However, there is no watch to replace it. Seeing as how early evening is right about now, it would be a good statement to make in saying that there will likely not be severe thunderstorms if they don't develop by 9:00 PM CDT.

Visible satellite imagery shows a blossoming thunderstorm in Southeast Iowa. That is the only activity in the discussion area. While there are some storms in Central Missouri, those are not within what we will be discussing tonight. Clouds dominate North Illinois into South Wisconsin, back into Iowa and North Missouri.

Radar imagery shows the supposedly crazy storm seen blossoming on the visible satellite imagery in Iowa, but both this radar and the radar operated by our Mobile Storm Track Team (MSTT) indicate the storm is actually very weak. We don't yet have enough information to diagnose why the clouds look so intense on visible satellite, but we will find out.

The image above is of MUCAPE, or Most Unstable CAPE. This was what the SPC used for the mesoscale discussion at the top of the page. We see high values of CAPE in North IL, South IA and North MO.
We will keep watching the radars for further information.
By Andrew at 7:41 PM No comments:

July 28- Area where storms will develop

We have determined the area where we believe the storms will have the most effect on people tonight.
The map above is the MCS Maintenance, which is made up of over 340 MCS parameters.
The higher this parameter is indicates the more likelihood of the development and/or upkeep of a MCS (storm cluster).
By Andrew at 5:28 PM No comments:

We did some research regarding 1 meter underwater temperatures in the ENSO regions, and decided to compare last winter's temperatures to this year's at current time of publishing.

We can see how cold the water was last year, when there was a strong La Nina in effect. This year, we can see how temperatures in the ENSO regions have decreased by 2 degrees Celsius in a span of 2 or 3 months. This rapid cooling is definitely an encouraging sign that a La Nina may be in the works for this winter.
By Andrew at 4:59 PM No comments:

The area outlined in blue is an area of unstable air at this time.
MUCAPE indices are already past 5000 j/kg as we watch for severe storms tonight. 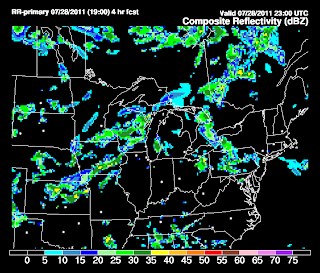 We're watching the Rapid Refresh for these storms to form around 6 or earlier.
We expect these storms to congeal into a cluster, some cells with possibly strong structures.
By Andrew at 4:54 PM No comments:

Don appears to be on a collision course with South Texas.
This will bring a very big dent into the Texas Drought. It won't cure it, but the drought certainly will recede by some point.

More discussion as more info comes out at noon.
By Andrew at 9:36 AM No comments:

Q: How much rain fell last night?
A: Officially 7.47 via the NWS for yesterday's rain and not early this morning, but news sources indicate 10+ inches as a storm total.

Q: What are the effects?
A: Reports of water rescues, bridges flooded, etc.

Q: How did this happen?
A: The storms in Dubuque didn't stop because more kept forming behind the ones that were already moving through. We call this 'training' in the weather world. It is similar to what happened in Chicago several days ago.