East Atlantic About to Get Much More Active 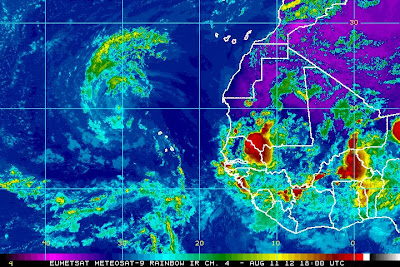 The Eastern Atlantic is about to get much more active over the next several days.

Satellite imagery shows a couple clusters of intense convection in western Africa at this time. As these disturbances move west, they will certainly pose a tropical development risk as they move offshore. I have not seen clusters this strong this season in the time I have been monitoring the East Atlantic / West Africa.

The steering layer for the East Atlantic shows that these systems will likely start out their journey in the ocean by moving west. A big player in the track of each of these disturbances will be how far south they start when they move offshore. For instance, some disturbances will be too far north and end up swinging north into the middle of the ocean, whereas others will be far enough south to keep a westward track and possibly eye the Caribbean.

If I were to take a guess on the track of each of the two disturbances shown on the satellite image shown, I would say that the first cluster closest to the ocean will probably end up going out to sea, whether immediately after leaving Africa or just before entering the Caribbean.
I do believe that the second disturbance shown has a better threat to aim for the Caribbean, due to its dislocation to the south of the first disturbance.

Tropical Development in Atlantic to Ramp Up

Additional tropical development in the Atlantic Ocean appears likely over the next couple of weeks as the Madden-Julian Oscillation (MJO) moves into Phases 8, 1 and 2 over the next several days.

The Madden-Julian Oscillation tracks anomalies of precipitation over the Equator. When these anomalies, dry or wet, are in certain parts of the MJO monitoring region, they are in different phases. When the MJO is in Phase 8, we typically see above normal precipitation anomalies over the Atlantic portion of the Equatorial region.
This above normal precipitation signals more convection than usual in the region, which can enhance tropical cyclone development. That is why, typically, when the MJO moves into Phases 8-2, you will see many forecasters become more optimistic on tropical cyclone development over the next few days.

This forecast of the MJO, from the ECMWF's Seasonal Ensembles, shows a very aggressive Phase 1 and Phase 2 in the forecast period, which is a very good sign for tropical development. Where this development occurs remains to be seen, but as of now, with Tropical Depression SEVEN dissipating and Invest 93 weakening, the Atlantic appears to not be prepared for significant development just yet, as the MJO is not favorable at the moment.

Andrew
By Andrew at 2:05 PM No comments: Links to this post

Tropical Depression SEVEN has dissipated just before the Leeward Islands this morning, as unfavorable environmental conditions led the depression to degenerate into a tropical wave.

SEVEN will head into the Caribbean, likely on a westward path before restrengthening should occur at some point in the next 72-120 hours. There is a chance that this redevelopment will happen before then, but I find that to be unlikely, as it takes time for a wave to get itself back together into a tropical system.

An analysis may be issued later this evening on where it is now.

Andrew
By Andrew at 12:15 PM No comments: Links to this post

Tropical Depression EIGHT-E has formed just off the coast of Mexico. TD-EIGHT-E is composed of what was Hurricane Ernesto in the Atlantic, making this the first cross-oceanic system of the season.

The track for TD-EIGHT-E has been shown as a mainly westward track with a slight southward movement as well, before a sharp northwest turn occurs. During that time, strengthening into a hurricane appears likely, with tropical storm formation expected this evening.

An evening post will come out this evening. The TCF Model will NOT be run tonight, as it is not fully ready to forecast. You can see the page of the TCF model by clicking here.