A swath of warming in Asia that previously had begun to stagnate and retrograde into Europe appears to be making a second push towards reaching the Arctic. The Climate Prediction Center animation above shows temperature anomalies in the upper stratosphere way above normal in Asia. This swath of warming was generated off of the Himalayan mountain range, which is a common place for air to rush up the mountainside and shoot into the stratosphere to begin the process of a sudden stratospheric warming. A week ago, the mass of warming began to stagnate after an initial forecast of the mass of warming shooting into the Arctic through the Bering Sea. However, in the last few frames of this animation, you can see how the warming starts to push into northern Siberia in an attempt to get into the Arctic and create an official sudden stratospheric warming.

Recent mountain torque values show a spike in the beginning of March when we initially thought the warming would hit the Arctic, and now an even stronger rise in global mountain torque values. The sharp increase of mountain torque in the winter is known as a predecessor for a sudden stratospheric warming event. Considering the swath of warmth is making its big push to the Arctic (and really isn't that far away), I expect this mass of warmth to hit the Arctic in the next week to 10 days. This mountain torque event is stronger than the last, and the mass of warmth is making a very strong push to reach the Arctic. If this was to happen, we could expect an enhanced risk of severe weather later on in the spring, as well as a cooler May-August, especially in the northern US. 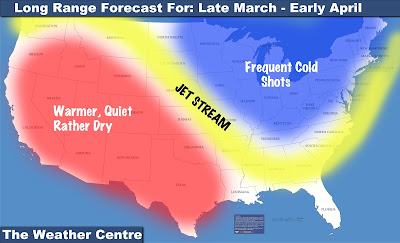 This is The Weather Centre's Long Range Forecast for Late March into Early April.

I am anticipating a highly meridional flow to establish itself in this timeframe, in the face of a very volatile pattern across the northern Hemisphere. Excessive high pressure over the Arctic will allow for cold air masses to be forced down into lower latitudes. High pressure centered to the south of the Bering Sea and low pressure centered directly in the Bering Sea will allow for high pressure to take over the Western US. This comes as the Bering Sea low pressure extends itself down into the waters offshore the west coast of North America. The formation of the Rocky Mountain high pressure system will be helped by cycling bouts of low pressure in the Midwest, Great Lakes, Mid-Atlantic and Northeast. When these large spots of low pressure pop up in the aforementioned regions, it can be expected that a fresh dose of cooler-than-normal air will be given to many east of the Mississippi River. Based on how strong the high pressure system in the Arctic will be, I can see it possible that some isolated wintry precipitation may make its way into Florida over the next couple of weeks. That's how strong this cold air will be.

The meridional flow of the jet stream (meridional means not straight; wavy, disturbed) will allow for the jet stream to be stronger than normal at some points in the US. If a storm system manages to get into the right place at the right time, I could see a solid potential for a severe weather event in the southern Plains and Gulf Coast.

Honestly would not be surprised to see late March allow one or two more winter weather events, possibly an accumulating snow event. Based on several other atmospheric indices I am monitoring, this snow threat would likely be confined to the Northeast and general Eastern Seaboard. The risk for Nor'easters lives on.