This is the discussion concerning the potential for a pattern change in coming days. 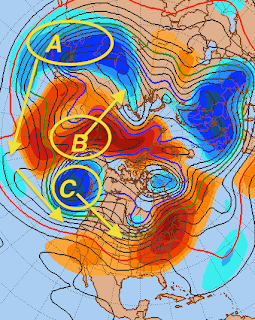 This is a forecast in the next few days of the Northern Hemisphere 500mb height anomalies. The 500mb level is located way up in the atmosphere, and is the best area to find low pressure (LP) or high pressure (HP) systems. I did mark off a few things in this picture, so let's go over them now.

A - Persistent LP in East Asia

The GFS Ensembles are forecasting a strong persistent LP pattern over eastern Asia in the next couple days in response to both the Bering Sea ridge and a developing HP system that will be retrograding towards Asia. It has been shown that there is a 6-10 day gap between observed height anomalies in East Asia and weather in the East Coast. So, if we have a deep LP pattern over the East Asian region, I find it plausible that there could be more than one strong storm system affecting the East Coast. Also enclosed in this circle near East Asia (and further marked by a series of arrows cutting across the Pacific) is a leg of low pressure extending in the east Pacific. This is in direct response to the formation of this retrograding high pressure system that is combining with the Bering Sea ridge. Because the Pacific is a big place, there is a lot of room for things to happen. I believe that this leg of LP anomalies will come together as possibly more than one storm systems that will hit the West Coast, which could then affect the areas east of the Front Range.

As previously mentioned, there will be a solid high pressure system in the Bering Sea, as has been the case for a while now and will continue to be the case for a few days to come. I did also mention something about a retrograding (weather system moving west in the North Hemisphere) high pressure system. This retrograding HP system will swing north into the Bering Sea, and the force of the impact will knock the newly formed single ridge north and west into North Asia. This movement of the ridge north and west will force the polar vortex (PV) east and south, and this enhances the possibility of not only this PV moving into Canada/US (cold weather), but also the PV shifting into Greenland, which would create a positive NAO (North Atlantic Oscillation). In a nutshell, a positive NAO shapes the jet stream to hold the cold air at bay from the East US. So this could be a double-edged sword, and I will further address this later on in this article.

In physics, you will hear a lot of 'for every reaction, there is always an equal and opposite reaction', directly from Newton's Laws of Motion. The same idea applies here in weather. We have already established that there is a ridge in the Bering Sea. In response to this ridge, we have seen (and will continue to see) a persistent LP anomaly in the Gulf of Alaska (GOA) in response to the Bering Sea ridge. You may have heard it on your local news stations, and this is a pretty significant thing, especially when you will see the retrograding HP system knock the Bering Sea HP system out into North Asia. When that movement happens with the Bering Sea ridge, this GOA persistent trough cannot stay in its place unless a replacement ridge comes along (which does not appear likely). Because of the lack of the HP in the Bering Sea, the GOA trough will have to move east into either Canada or the US. The GFS Ensembles like the idea of this trough flowing into the Southwest, where it could stay south and go up the East Coast, or go up into the Midwest, but that's another post for another time.

Now, here's the issue. The GFS Ensembles take that same post-GOA trough and let it stay in the Southwest. That is not good. What a persistent LP pattern in the West Coast means is a negative PNA. As I described with Newton's Laws of Motion, a persistent trough in the West would theoretically provoke a persistent ridge in the East, which would mean warm weather to the east of the Front Range. 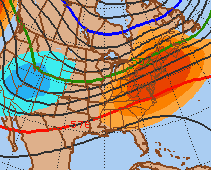 This is an example of that stormy West/quiet East pattern, which is actually the forecast for just under 10 days away. This is what I fear may happen if that Gulf of Alaska LP system sticks around in the Southwest for too long. That would incite a negative PNA (Pacific-North American), which is shown above- the cold is kept away from the Central and East US (save CO/NE/KS/WY). The Northeast is most affected by the negative PNA, especially if this forecast verifies.

But, all in all, here's the thing. The pattern will be changing, and the lack of a Bering Sea ridge will allow more storms to move through the Lower 48, thus more potentials for cold and snow. These GFS Ensembles show the general picture, and not a more focused forecast like the first sentence of this paragraph. 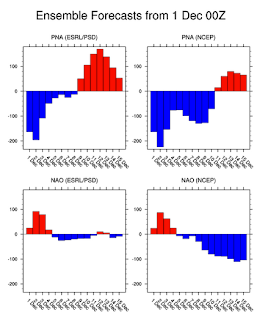 Here are the teleconnection forecasts, which is just a big, fancy word for different atmospheric patterns. These are two teleconnections, with the top 2 images for the PNA and the bottom 2 for the NAO. The difference in between the 4 images is that the left half of the images are forecasts from the ESRL/PSD agency, and the right half are from the NCEP agency. If that confused you, here's a breakdown:

Personally, I trust the ESRL/PSD forecasts more than the NCEP, because the NCEP ensembles are just the GFS Ensembles. The ESRL/PSD has their own set of ensembles, which is likely more physics-based than the NCEP, just because that's what the ESRL/PSD specializes in. So, for the days leading into Mid-December, the PNA is expected to come back from a strong negative phase to a strong positive phase according to the ESRL agency. This is pretty possible. as the GOA trough will be leaving, but again, we have to wait to find where it lands. The NCEP agency keeps the PNA much more negative than the ESRL, and a weaker positive phase. I think this is also likely, but again, wait-and-see mode for the GOA trough.
As for the North Atlantic Oscillation (NAO), the ESRL/PSD keeps it mainly neutral, which I find possible as the Bering Sea ridge moves into North Asia and then into north Europe. Bringing back the Newton's Laws of Motion, this ridge could then provoke an LP anomaly near Greenland, to which the HP and LP anomalies would cancel each other out, leading to a neutral NAO. The NCEP prefers a negative NAO in the long range, and this is dependent on the post-Bering Sea ridge's placement, so, wait-and-see.

In summary, I expect a stormier pattern in the long range thanks to the departure of the Bering Sea HP/Gulf of Alaska LP pattern. However, depending on where that GOA LP ends up, the overall pattern could end up warmer than normal if the LP sits around in the Southwest.

Things are looking up!

The first day of the off-season of the Atlantic Hurricane season is bringing a threat for tropical cyclone formation, in a year that shattered expectations and records across the tropical board.

This invest is located well out to sea in the middle of the Atlantic and is posing no threat to land. The National Hurricane Center (NHC) is labeling this system with a 50% chance of formation in the next 48 hours. It only has a small window of opportunity for formation before it interacts with a frontal system and becomes extratropical. 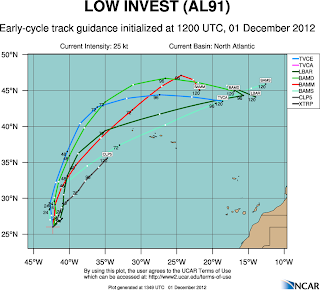 Movement is northward at 10-15 MPH, and forecast models show that Invest 91 will generally continue with this path before making a curve to the east, possibly towards Europe. At that point, the chance for tropical cyclone formation appears possible, but still not a threat to the US.

Andrew
By Andrew at 2:22 PM No comments:

There is the potential for a winter storm within the December 10-14 timeframe. Let's dive right into what the models are forecasting in this timeframe.

The American GFS model is predicting this storm to take a more northern track through the Upper Midwest and Plains, leaving an all rain solution for many of the areas that the CMC had given snow to. The GFS does give some good snow to the Upper Midwest and Plains, as shown in the bottom right image. However, the GFS is quicker with this storm system and is not as strong as the CMC model if you compare the 500mb height charts in the upper-left hand corner images.

Considering the GFS has had very high verification scores recently, and because the GFS has had this system in its sights for a while now, I will side with that model for the time being. I'm not counting out the CMC, but I believe the GFS knows what its forecasting at the moment.

Andrew
By Andrew at 2:01 PM No comments:

Why I Was Wrong In Writing Off December 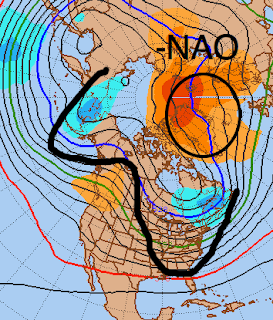 I don't like to flip-flop on forecasts because I generally don't trust meteorologists that do such a feat. However, this time around, I have to tell you all that last night's post on December is likely partially incorrect, and I'm here to explain why.

In last night's post (click here), I told of how the strong Bering Sea High Pressure (HP) anomalies would move north, but into North Asia. This movement could provoke a polar vortex strengthening over Greenland, which would not be good at all for the East US' prospects for cold and snow. However, in a crucial error, I did not look at the long range forecast for the North Hemisphere height anomalies, as pictured above.

This forecast shows that our North Asia HP system has moved into North Europe, where it has combined with Greenland to produce a negative NAO. This negative NAO would then make a disturbance form in the East US.

So, in conclusion, I did make the crucial error of not looking at the long range forecast and instead kept my eyes on the short range. While this is still a far way out, the GFS has been trending with a general pattern change as of late, which would arrive in Mid December. I apologize for this sudden change of my forecast- I never want to flip on my forecast, I find it one of the worst things a forecaster can do.

Watch for mid-December to see a colder, stormier pattern to emerge. Siberia is still working against a cooler idea, so be wary of such an idea.