This post will address my thoughts on the ENSO situation, the potential for East Coast snow events in the near-future, some additional spring thoughts, and more information on the upcoming severe weather season. This post will be of the more technical variety, so there will be a summary at the bottom for those who may not know as much weather jargon as some others do.

Above, we see the latest data from each monitoring region of the El Nino Southern Oscillation (ENSO) phenomenon. The blues represent below normal sea surface temperature anomalies (SSTAs), while oranges show above normal SSTA values. The El Nino phenomenon is characterized by above normal sea surface temperatures, and the La Nina is shown by below normal sea surface temperatures. Looking over all of the regions, we see that most of them are in a strong cooling period, actually hitting La Nina criteria of -0.5 degrees C anomaly or below. However, Nino region 4 is experiencing sudden warming to El Nino levels of 0.5 degrees C anomaly or above. Nino region 4 is the furthest west of the four regions, as the graphic below shows.

So what's making this region warm so quickly? Well, the answer lies in the sharp cooling trend we've seen in the regions further east, like Nino regions 3.4 and 3.

Shown above is a two-panel graphic, depicting SST anomalies on a depth by longitude chart on top, as well as a mean equatorial temperature depth-longitude chart on the bottom. Looking at the SST anomaly chart, it is very clear that there is a strong Kelvin Wave present under the surface. Kelvin waves are defined as 'warm spots' in the ocean that traverse the Equatorial Pacific, beginning near Indonesia and ending around Ecuador and Peru. The Kelvin Wave is actually a massive-but-small wave, meaning that while the water height only rises by a couple inches when the wave moves through, the Kelvin Wave stretches a vast expanse of water, and its effects on the climate are even more significant. During an El Nino, we see warmer than normal waters over the surface of the four Nino regions. Kelvin Waves can help to speed up the El Nino process by bringing an expanse of warm water into the Nino regions, about 100 to 200 meters below the surface. If it's 200 meters underwater, how can Nino region 4 at the surface be warming up? Well, check out the top of the SST anomaly image. I circled an area where a finger of warmth has propagated to the surface, and that is what's causing the sudden warmth. But the Kelvin Wave isn't responsible for just the warming aspect; it's also responsible for the significant cooling we're seeing in Nino regions 3 and 3.4. 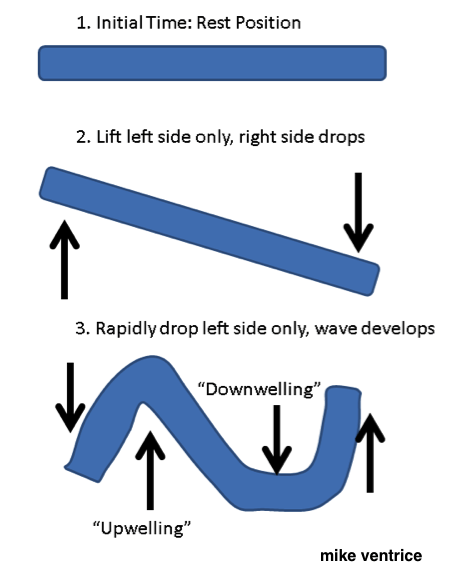 This graphic, drawn up by Mike Ventrice, shows the sort of situation we're experiencing with the Kelvin Wave. As the Kelvin Wave pushes east, we see sea level anomalies rise in conjunction with the anomalous warmth. Ahead of the Kelvin Wave, we then see downwelling, which lowers sea levels and cools sea surface temperatures, leading to a 'false Nina', where the SSTAs might tell us there's a La Nina, but it's actually just a byproduct of the Kelvin Wave beginning to push east.

This phenomenon of warming-before-cooling has been observed well with the last few Kelvin Waves, as this chart shows. We saw one wave crossing the Pacific in September 2013, with little to no cooling before it; we saw a second wave present in November to December 2013, which did provoke some noticeable cooling before the wave traversed the Pacific, and the latest wave looks to be the strongest one of the three, with even stronger cooling occurring just before the warming. If you think about it, a case can be made for the strength of downwelling before the Kelvin Wave determining the strength of that Wave, as it seems the stronger downwelling episodes occur before the stronger Kelvin Wave episodes. The other Nino regions are experiencing anomalous cooling due to this downwelling, as the circled portion in the chart above shows.

The Kelvin Wave has shown up noticeably on sea level anomalies...

Both of these indicators point to the idea that we're probably about to exit this neutral ENSO/cool-neutral ENSO situation we've been in for the last couple of years, and a transition to an El Nino seems more likely. Model guidance has been simulating this rise to a moderate El Nino by fall very well.

The next question becomes, will this Kelvin Wave actually make it to Ecuador and Peru? In order to find out, we have to turn to the western Pacific.

Shown here is a map of 850mb winds (arrows), outgoing longwave radiation (contours) and outgoing longwave radiation anomalies (colors) from the period of January 22nd, 2014 to January 28th. We're going to focus in on the portion of this map I boxed in. If we look at that section, we see the arrows pointing down and converging on the Equator before then pointing eastward. This phenomenon is the result of two Pacific gyres on opposite ends of the Equator. This means that there were two low pressure systems, one on either side of the Equator, that were spinning air towards the other in such a fashion that then allowed the air to be pushed off to the east. How is this possible? Considering low pressure systems north of the equator rotate counterclockwise, and low pressure systems south of the equator rotate clockwise, the winds from each system can combine and push their combined winds off to the east, which can then help with the movement of the Kelvin Wave.

The graphic above gives a good picture of what these two Pacific gyres end up doing. Considering we saw one of these double-gyres in late January, and another one is about to get going, the Kelvin Wave should continue to push to the east, and ought to be able to affect all Nino regions. This raises the question, could we see an El Nino by next winter? I'm comfortable putting down a 'yes' for that question. 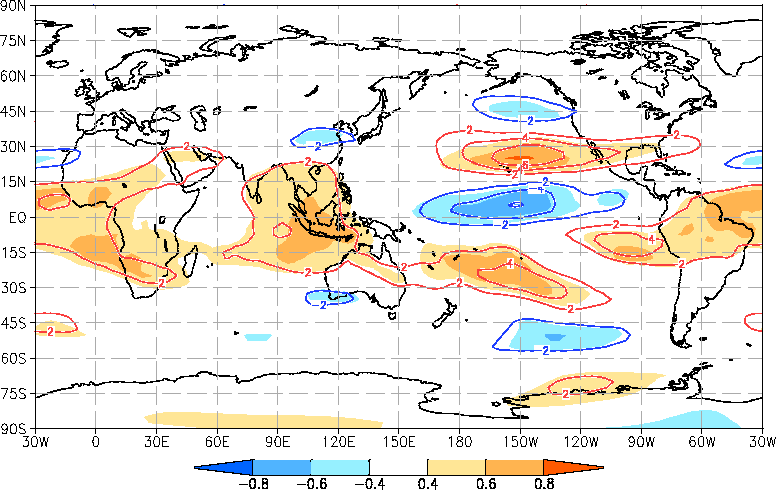 Now, the warming of the westernmost Nino region 4 will likely have impacts on our severe weather season. How? Take a look at the chart above. This graphic shows correlations of 200mb winds based on the Nino 4 phase. In simpler terms, for example, when the Nino 4 has below-normal waters, the oranges and yellows (which signify positive correlation areas) would then experience below-average winds. The areas shown in blue (which signify negative correlation areas) would then see stronger than normal winds. In this case, since we have warmer than normal sea surface temperature anomalies over Nino region 4, we ought to watch for at least a slight strengthening in the subtropical jet stream as we enter March, due to the positive correlation depiction over the southern US. Because the current warming is just a little piece of a Kelvin wave and not yet a legitimate El Nino, I'm not expecting the subtropical jet stream to completely go nuts and strengthen out of control. However, it wouldn't surprise me to see the STJ strengthen in the next couple of weeks as a result of this correlation. And, if we have a stronger subtropical jet stream, the risk of severe weather then goes up. Hence, we need to watch out for the severe weather season to ramp up in coming weeks, not only due to the gradual retreat of this harsh winter, but also due to the slightly-strengthened subtropical jet stream.

Let's switch gears and discuss my thoughts for the end of March and into April (forecast for late February and most of March here), as well as why I feel we need to watch out for a snow event along the East Coast in the middle of March.

This image shows 500mb height anomalies over the Northern Hemisphere during the January 22 - January 28 period of this year. In this reanalysis, we see strong ridging over the west coast of North America, producing a northwest flow situation into the East Coast, where a lobe of the polar vortex sat to the north in Canada. Something we can use here is the Lezak Recurring Cycle. The Lezak Recurring Cycle, or LRC, is a tool developed by meteorologist Gary Lezak that, in essence, can enable forecasters to predict the overall weather pattern months in advance. The gist of the LRC involves a cycling weather pattern that develops in October and November of each year; no pattern is the same from year to year. Around mid November, the LRC begins to repeat, meaning we start to see a similar weather pattern in mid November that we saw in early October. This means that the cycling pattern has begun, and it will continue to cycle on a regular, unchanging 40-60 day interval for the next ~10 months before it dissipates over the following summer. If we utilize the Lezak Recurring Cycle for this timeframe, we can extrapolate the January 22-28 period out 57 days (which is the current length of the LRC this season), we arrive in mid-late March. This means that it's very possible we see this late January pattern come back around in late March, northwest flow included. The reason I'm discussing this northwest flow so much is because it has the potential to not only bring us an East Coast snow threat in mid-March, but also has the potential for a severe weather event.

As I discussed above, the subtropical jet stream could be strengthened as we enter March thanks to the warming of Nino region 4. If that occurs while we are in a northwest flow situation in mid-late March, it's very possible we come across a favorable environment for a spring coastal storm. I'm not saying we'll see one for sure, but the last time we saw a northwest flow come about and I thought there might be an East Coast snow event as a result, it ended up coming to fruition.

These images show some possible scenarios for northwest flow severe weather outbreaks, where we would have a lobe of the polar vortex displaced in eastern Canada, with strong ridging along the west coast of North America. Due to the warm pool in the northeast Pacific, it's entirely possible we see sustained ridging stick around in the western portion of North America like we saw in the late January image earlier in this post, which would then lead to some northwest flow severe weather opportunities and snow potentials. Both types of inclement weather potentials would be assisted by the stronger subtropical jet stream.

If we take a look at the 500mb anomaly chart a week after the January 22-28 chart earlier in this post, we see that the environment over the January 29-February 4 period has changed. The ridging has shifted westward into the Bering Sea, leaving the lobe of the polar vortex to weaken and move out of the way, which then results in ridging along the East Coast. I would expect this sort of environment to come back in the closing days of March and opening days of April in accordance with the LRC. In that time period, we may be looking at severe weather threats displaced further west and north, with warmer weather for the East and cooler weather in the West. By this time, we will have probably seen the end of big winter storms, with the exception of a rogue snow event in the northern Plains before winter finally leaves the United States.

•Warming waters in the Equatorial Pacific could have long term consequences for the weather pattern in spring, summer, and into next winter.
•Due to those warming waters, severe weather chances may be enhanced later in spring.
•We are watching for a potential snow event in the East Coast in mid March.
•Late March into April may feature a warm East and cool West.