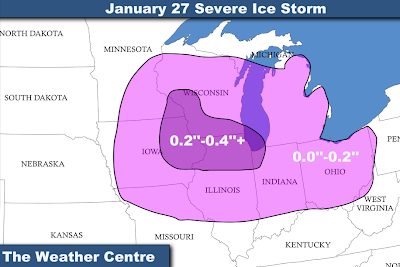 A severe ice storm appears to be attempting to set up across the Midwest, Great Lakes and Ohio Valley.

As a storm system begins to approach the region shown above, temperatures will warm to near freezing levels, a perfect scenario for an ice storm. Now, freezing rain is a very tricky precipitation type that commonly comes down to a 'nowcasting' (forecasting as it happens) event, because the environment that supports freezing rain (called ZR in the weather world) is so hard to achieve.

However, recent model forecasts have been in general agreement that an ice storm will hit come Sunday afternoon into evening for the areas in dark purple. These areas could see a severe ice storm with significant travel impacts, as shown below in the Exclusive Impact Scale. I am seeing one forecast for nearly half an inch, one forecast around a quarter of an inch, and another forecast around .15'' in the dark purple areas, so I decided to go to the medium and forecast a fifth of an inch to 4/10th's of an inch, with that plus sign added in the event that half inch forecast verifies. Considering it's an outlier, I'm not that optimistic on amounts really exceeding 0.4''.

Areas in light purple will experience lighter ice accumulations, but still with substantial travel impacts. I expect the Midwest to get the higher end of this 0'' - 0.2'' forecast, with the Ohio Valley getting around the median. But again, it will likely be a nowcasting event. 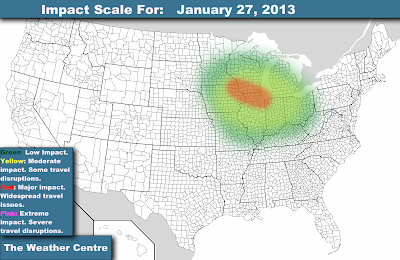 It is becoming apparent that Europe may intercept a batch of brutally cold air in coming weeks as a result of the collapsing polar vortex.

Shown above is the European model's potential vorticity (PV) forecast for 10 days away at the isentropic level of 380 K. The isentropic level is a fancy name for just another layer of the atmosphere. 380 K translates to roughly 200 millibars- essentially the jet stream. In areas of heightened potential vorticity, low pressure centers are found. These charts are useful in identifying pieces of the polar vortex in the wintertime when they can split, like this situation.

The above image portrays a solid piece of the polar vortex journeying south into Europe in the 10 day forecast in time to introduce potentially harmful cold. We aren't talking about some stronger than normal low pressure system, this is a piece of the polar vortex here. If we do see it come south, temperatures could go down well below 0 (Fahrenheit) in many locations across the continent.

Now, depending on how long this vortice stays in place, which I don't believe will be a long time due to a more progressive atmospheric pattern, the intensity of the cold could grow. However, as a result of that progressive-ness and the fact that the vortex is too weak to hold any bone-shattering cold, this should not be as harmful as it comes across to be. However, the elderly and young may need to be watched during the 10-14 day period if this does come to fruition, because cold is cold, and serious cold can be harmful.

Polar Vortex Takes Another Swing at Northern US 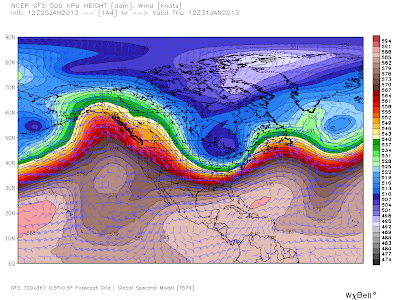 The latest GFS model forecast has the polar vortex taking another swing at the Northern US in the next 5-7 days, as January begins to wrap up.

As I have been fearing, the multiple sudden stratospheric warmings are taking their toll on the polar vortex here at the surface. We already had the initial impact of the split polar vortex over Martin Luther King Jr. Day, and now appear to be looking at Round 2. As the 500mb forecast above details, there could be a second, stronger blast of cold air that hits the northern part of the nation. The GFS places this piece of the vortex substantially further south than the previous brush with the vortex; that one went into South Canada.

It does not matter where this piece of the vortex goes, because the ball has already been rolling on what we could face in February. I have been seeing consistent forecasts that detail a full stratospheric polar vortex breakdown, more on that later tonight.