I am closely watching the late May and early June timeframe for the beginning of the tropical season in the Gulf of Mexico, which will coincide with the official start of the tropical season.
Around this timeframe, moist air will finally shift into the Gulf of Mexico, as the Gulf has been pretty dry recently. Additionally, the jet stream should lift north, leaving out shearing and opening the door fairly wide for tropical activity. Upper level winds will not totally die off, and little blips of winds may provoke something of interest in the region should small systems come around the bend.

Tropical Depression May Eventually Landfall as Hurricane in Mexico

Tropical Depression Two-E has formed in the east Pacific. It looks to rapidly intensify into a tropical storm today, before becoming a hurricane late Tuesday. The HWRF shows it landfalling with over 120 knot winds, as seen below. 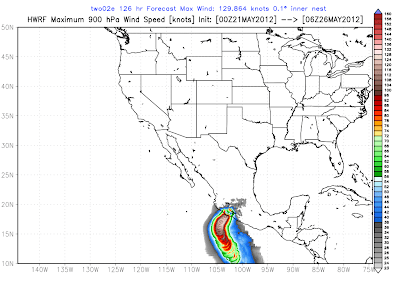 130 knots is the equivalent of 150 MPH, which would actually be a Category 4 hurricane. It's pretty safe to say that that solution probably won't happen going up against the NHC track, but I will keep an eye on it.