Analysis of Atlantic Hurricane Season - May 8, 2013

I want to share my thoughts about when we may begin to see our first tropical cyclone threat in the Atlantic and Caribbean waters. Bear in mind this is all my opinion and should not be taken as a full-confidence projection. 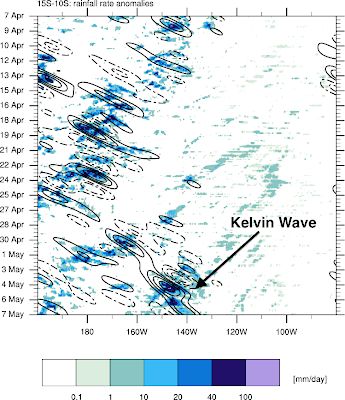 As we see this Kelvin wave progressing eastward, the question begins to pop up: When will we see enhanced tropical convection in the Atlantic- in the form of a tropical cyclone? 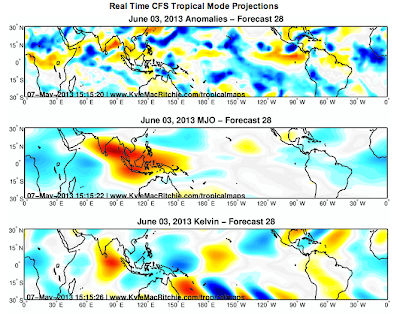 The answer can be found in just under a month. It appears that our first shot at a chance for tropical cyclone development is in the opening week of June. The above image shows three forecasted tropical wave parameters from the long range CFS forecast model. The panels we want to look at are the bottom two images. The first one shows the projected MJO anomalies for early June. If you remember from our Kelvin wave intro discussion, the Madden-Julian Oscillation goes from west to east, starting from the Indian Ocean. This forecast has extreme positive anomalies from the Indian Ocean east to the waters north of Australia. The presence of these intense positive anomalies in the MJO category tell me that the Madden-Julian Oscillation will be in Phase 1. We will discuss phases and their effects on tropical cyclone development a bit later in this post. The bottom panel shows Kelvin wave anomalies. We again see positive anomaly colors in the Indian Ocean for this indicator, telling me that a Kelvin Wave may be in bloom across the waters adjacent to India. If this were to be true, we would likely be seeing a strong Phase 1 MJO. 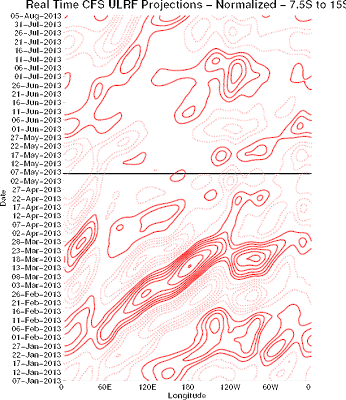 A graphical projection of the Madden-Julian Oscillation reveals the idea of a Phase 1 MJO is intact. We see a swath of raised MJO anomalies on the farthest left side of this image, at approximately 0 to 60E longitude. This is the traditional area for late Phase 8/early Phase 1 MJO development, in western Africa and towards the western Indian Ocean. This graphic, called a Hovmoller, then shows the MJO wave progressing eastward into the month of July, depicted by the movement of the MJO swath to the upper-right part of the image.

So why are we so concerned about what phase the Madden-Julian Oscillation is in?
Put simply, if current forecasts are correct, this would truly be the first possibility of tropical cyclone development in the Atlantic basin.

This image above shows historical development of tropical cyclones by phase. We see Phase 1 in the top left, rounding out to Phase 8 in the second panel of the bottom row. The bottom-right panel shows tropical cyclone development in occurrences of the Madden-Julian Oscillation being too weak to have a defined phase. If we look at the top-left panel, depicting development in Phase 1, we see a multiple cyclone developments in the eastern Pacific waters, but also a few hits in the Caribbean. It is these few 'hits' in the Caribbean that tell me we should encroach on the Atlantic's first chance for tropical development as we enter the first week of June. Of course, forecasts will change as we head towards June, and I will keep you up to date. But this is certainly the first solid piece of evidence that says we are rapidly approaching the start of the Atlantic hurricane season.

Andrew
By Andrew at 8:18 PM No comments: Links to this post