These images are from KFOR. 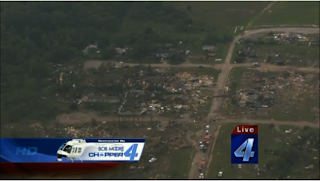 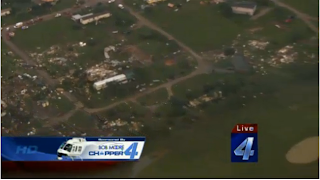 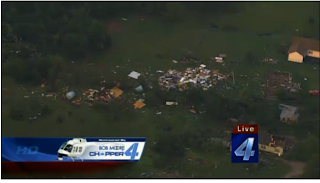 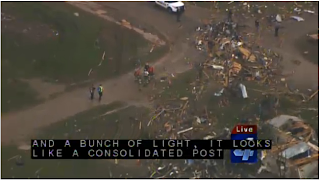 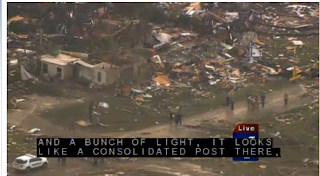 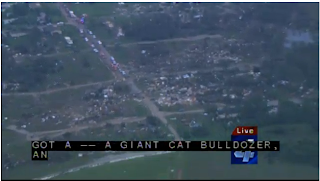 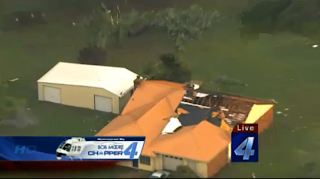 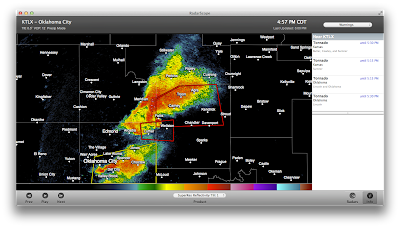 IN ADDITION TO A TORNADO...PING PONG BALL SIZE IS EXPECTED WITH THIS
STORM.

LOCATIONS IMPACTED INCLUDE...
WELLSTON AND LUTHER.

By Andrew at 5:01 PM No comments: Links to this post 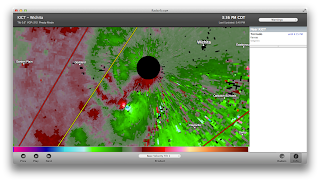 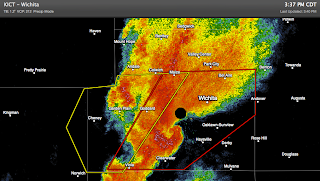 ...A TORNADO WARNING REMAINS IN EFFECT FOR SOUTHERN SEDGWICK COUNTY
UNTIL 415 PM CDT...

THIS IS A PARTICULARLY DANGEROUS SITUATION.

IMPACT...YOU ARE IN A LIFE THREATENING SITUATION. MOBILE HOMES WILL
BE DESTROYED. CONSIDERABLE DAMAGE TO HOMES...BUSINESSES AND
VEHICLES IS LIKELY AND COMPLETE DESTRUCTION POSSIBLE. FLYING
DEBRIS WILL BE DEADLY TO PEOPLE AND ANIMALS. EXPECT TREES TO
BE UPROOTED OR SNAPPED. 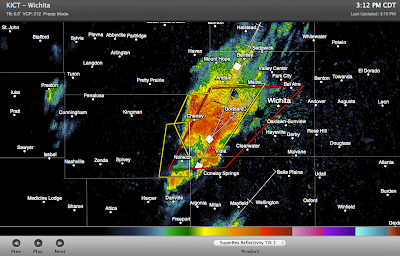 THE NATIONAL WEATHER SERVICE IN WICHITA HAS ISSUED A

* AT 303 PM CDT...A SEVERE THUNDERSTORM CAPABLE OF PRODUCING A
TORNADO WAS LOCATED NEAR VIOLA...AND MOVING NORTHEAST AT 35 MPH.

IMPACT...MOBILE HOMES WILL BE HEAVILY DAMAGED OR DESTROYED.
SIGNIFICANT DAMAGE TO ROOFS...WINDOWS AND VEHICLES WILL
OCCUR. FLYING DEBRIS WILL BE DEADLY TO PEOPLE AND ANIMALS.
EXTENSIVE TREE DAMAGE IS LIKELY.

THIS INCLUDES INTERSTATE 135 BETWEEN MILE MARKERS 7 AND 12.

THIS TORNADO WARNING REPLACES THE SEVERE THUNDERSTORM WARNING THAT
WAS IN EFFECT FOR THE SAME AREA.

TAKE COVER NOW. MOVE TO AN INTERIOR ROOM ON THE LOWEST FLOOR OF A
STURDY BUILDING. AVOID WINDOWS. IF IN A MOBILE HOME...A VEHICLE OR
OUTDOORS...MOVE TO THE CLOSEST SUBSTANTIAL SHELTER AND PROTECT
YOURSELF FROM FLYING DEBRIS.

By Andrew at 3:16 PM No comments: Links to this post 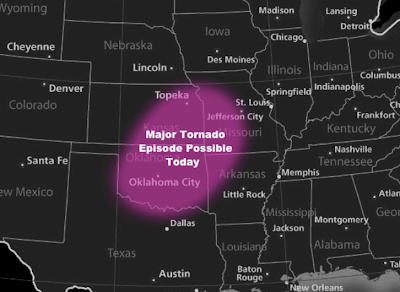 It appears that a major tornado outbreak is possible today across portions of the Plains. Central and East Oklahoma, eastern Kansas and southwest Missouri are at an increased risk for multiple, potentially strong tornadoes. A storm system progressing through the Rockies will continue to push east, and align with last night's storm system to create the chance of potentially extreme weather this evening. I reviewed model guidance last night and decided to make this post based on that guidance, which we will review below.

High resolution model guidance indicates that when these storm cells begin to form in Oklahoma and eastern Kansas, they will have some mean rotation on them. The image above shows helicity in updrafts for late this evening (9:00 PM CT roughly), and as you can see, there's a lot of colors in northern Oklahoma and southeast Kansas. These color variations, from green to orange, reflect the intensity of rotation in the updraft, and to see a cluster of very high values of this index is, to say the least, very concerning.

I also reviewed a zoomed-in model projection in central Oklahoma, and it appears that the National Severe Storms Laboratory WRF (NSSL WRF) is predicting a tornadic supercell to cross south central Oklahoma for over an hour. Norman, OK would likely be at least scraped by it, but Oklahoma City seems far enough north to miss it. Let me stress that the potential of being able to predict the movement of a supercell is unimaginably low and that last sentence should not be used as a forecast.

New model guidance just coming in the last hour tells me that this evening's severe weather event COULD be upgraded to a High Risk by the Storm Prediction Center (whose outlook is above). If this upgrade were to happen, it would most likely cover areas southwest of Norman into southeast Kansas. However, the moderate risk could very well stay in place as is- I'm unfamiliar with what the Storm Prediction Center is thinking about this event right now, so I cannot confidently say if they will upgrade or not. But based on the latest information, I see it is possible.

The threats for this event are as follows:
•Multiple tornadoes
•Strong tornadoes
•Damaging hail
•Damaging winds

Chase Spot
My chase spot (the location where I would go storm chase for the day) would begin in Paul's Valley, Oklahoma up north into Perry, OK to intercept the first budding storm cells.

Summary
A potentially life-threatening tornado episode is likely today across portions of Oklahoma, Kansas and Missouri. Large population centers, such as Oklahoma City, Norman and Tulsa in Oklahoma, Wichita, KS and Joplin, MO may be affected by this tornadic episode. It is advised that you prepare for this evening's weather event by securing loose outdoor objects, and familiarizing yourself with your emergency preparedness plan. Tonight may see multiple long-tracked supercells, of which more than one may put a tornado on the ground.

Andrew
By Andrew at 9:49 AM No comments: Links to this post