Many things have changed since I first released my Preliminary Winter forecast a while back, and it's time to make sure we understand what these changes mean for the upcoming winter. For ease of reading, I will break this down into sections. 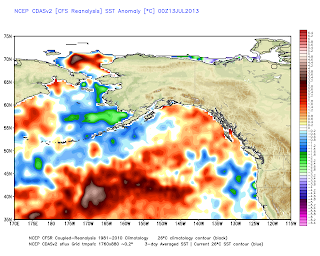 The PDO has two phases: positive and negative. In the positive phase, above normal sea surface temperatures preside over the waters immediately offshore the coastline from Alaska down to the Pacific Northwest. In the open northern Pacific waters, a body of below normal sea surface temperatures are observed. It can be thought of as warm water along the coastline surrounding the colder waters in the open northern Pacific. In the negative phase, it's exactly the opposite. Cooler waters are dispatched along the coastline from Anchorage to Seattle, and warmer than normal waters cover much of the northern Pacific.

Until recently, we have been in a negative PDO phase. This meant that precipitation trends during the winter were very dry along most of the Southern US, including the Gulf Coast states. This dry trend continued into the Mid-Atlantic, before very slight above normal precipitation anomalies were favored in the Great Lakes region. The negative PDO tends to favor a very wet West Coast. In the temperature department, a negative phased PDO meant nearly everyone in the nation experienced increased chances above normal temperatures (outside of the Northern Plains, which was favored to experience below normal temperatures).

As of the month of June, the government's official data indicated the month had been rather negative for the PDO. However, the way the sea surface temperature graph above looks, the PDO appears to be trying to get into a phase but is currently not in any decisive motion towards one phase or another. It does look like a negative PDO may try to re-emerge, but right now it is not clearly defined.

Recently, I came across two studies that found certain summer/fall patterns in the atmosphere can precede a certain phase of the North Atlantic Oscillation (NAO), a major wintertime oscillation that can determine long term winter weather conditions for the United States and around the world.

The first study involves the idea that summer snow anomalies over the Northern Hemisphere are able to predict the North Atlantic Oscillation (NAO) for winter. It is proposed in this study that summers with high snow content in the northern hemisphere precede winters with a low (negative) NAO index. Likewise, below normal snow cover in the JJA (June/July/August) period precedes a winter with an anomalously high NAO index. Per the latest FSU analysis, June wasn't all that great for snow cover, and July isn't doing much better. 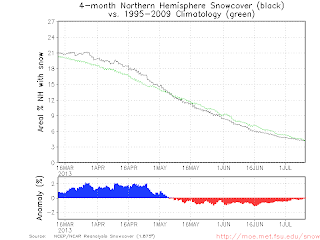 Should we go by this study, we may have to keep an eye out for the tendency of a positive NAO to at least attempt to evolve at some point in the winter. The rest of July and August is yet to be determined for snow cover, but right now, I'm not that bullish on negative NAO prospects.

The second study involves the theory that a certain sea surface temperature (SST) pattern in the fall can precede a certain phase of the NAO. The study indicates a horseshoe pattern in the central and northern Atlantic will develop in the fall and indicate what the NAO may do in the upcoming winter. For example, if you look at the study's link on Page 4 at the first image under '3. Results', you will see a positive SST horseshoe formation surrounding a body of negative SST anomalies offshore eastern Canada. This set-up would favor a negative NAO in the winter. Likewise, a negative SST horseshoe surrounding a positive SST swath would favor a positive NAO in the winter.

Taking a look at the latest SST chart from July 3, you can barely make out a slight negative SST horseshoe surrounding a very prominent positive SST swath off the coast of New England into Canada. Unfortunately, if this were to continue into fall (I don't see how that massive +SST swath could evaporate by August), it would be another unfortunate sign for the winter, possibly trying to tell us the chances of a positive NAO are rising.

The new long range model suite came out for the month of July in the last week or two, and at least two of these forecasts are very bullish on high pressure forming in the Northern Hemisphere. 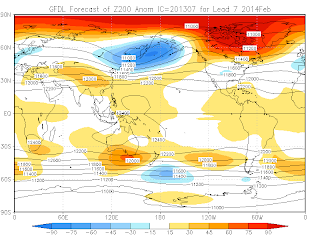 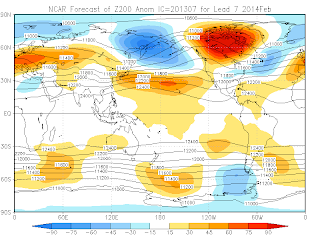 The GFDL (top) and NCAR (bottom) models are showing a very broad area of above normal anomalies across portions of the Arctic Circle; the NCAR model puts it right down across much of Canada, while the GFDL just washes over the entire Arctic Circle with a sea of intense positive anomalies at the 200mb level. It should be noted that these two forecasts are definitely on the extreme side of the model spectrum.

More importantly, I took a look at nearly a dozen forecasts for precipitation this winter, and a trend of above normal precipitation was present in the Midwest into portions of the Ohio Valley. A portion of the central Gulf Coast was also included. While all long range forecasts come with a high risk for an incorrect forecast, any trend in any set of models is usually a sign that the trending factor has a higher potential of verifying. The same guideline applies to this situation.

My prognosis on the upcoming winter is more hesitant than when I issued my preliminary winter forecast- since then, the PDO threw a big wrench into the prediction for the upcoming winter, and the newly-discovered summer correlations to winter do not help matters. I remain rather upbeat on prospects for at least slightly below normal temperatures in the East US, while precipitation trends are unclear.

Andrew
By Andrew at 3:53 PM 9 comments: Links to this post