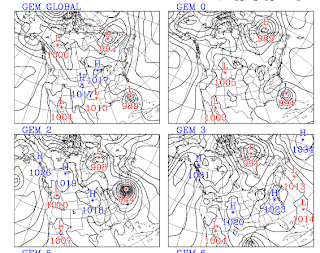 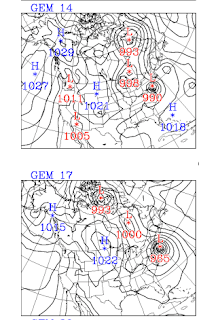 Several members of the Canadian's GEM model are landfalling a major hurricane on US soil on August 9th as Invest 99 begins to gather itself in the Eastern Atlantic.

Three of the members shown above have a strong low pressure system hitting the Northeast and Mid Atlantic regions on the 9th, which would have potentially devastating effects should there be significant rainfall that may overwhelm sewer systems in the area. Worth mentioning is member 2 of the GEM Ensembles, which has a 944mb major hurricane hitting the Northeast, which would just be catastrophic. Two other members also hit Florida as a strong low pressure system, both of which are in the 980mb realm, considered a fair hurricane.

The potential that this will actually happen is next to nothing. The GEM is known for overdoing things, and the atmosphere will not nearly be able to handle a system of such power, leaving that solution out of any reasonable possibility of a landfall.

This is still very much worth watching. While the eventual track and strength of the system may not be the solutions shown above, they still bear watching.

Andrew
By Andrew at 9:37 PM No comments: Links to this post

Positive PNA May Save Midwest Winter Yet

The CFS v2 is showing a ridge of high pressure over the West Coast, seen by the arcing shape of the lines over the western part of the nation on this map of 200mb anomalies. Of additional interest is the depression of lines over the Southeast.

So, what does this all mean?

The ridge in the west and increased jet stream action in the southeast are characteristic of a positive PNA, which is made up of a high pressure system in the western part of the nation, as well as a storm track becoming enhanced over the Plains and Midwest into the East Coast. The graphic of a positive PNA can be seen below.

A positive PNA was actually a key player in creating the Chicago Blizzard in 2011.

Of additional interest is that this potential positive PNA may team up with the incoming El Nino. The El Nino is shown on the first image as an enhanced area of 200mb anomalies over the Southeast. This enhancement is characteristic of the sub-tropical jet stream, which is enhanced in an El Nino and gives the Northeast strong Nor'easters.

All of that said, if this were to turn out, we could have a 'saved' winter for the Midwest and Ohio Valley thanks to the positive PNA. However, I cannot confirm that this is in fact a positive PNA. This is just what it appears as, and could very well change in the future.

Andrew
By Andrew at 6:25 PM 3 comments: Links to this post

Westward propagation of warm water anomalies in the ENSO monitoring area has begun, as seen in this animation link.

Weekly sea surface temperature anomalies show a movement westward of waters with temperatures anywhere from 1-1.5 degrees above normal in the image above. This westward movement enhances the potential for a central-based or west-based El Nino this winter, both of which would be better for an East US snowy winter than an east based Nino.

It will take some time to see if this propagation continues, but this is an encouraging sign for those wanting snow on the East Coast and Northeast regions.

Andrew
By Andrew at 6:11 PM 2 comments: Links to this post

Values between the 2008-2010 Southern Oscillation Index (SOI) readings and 2011-present SOI readings are eerily similar. The 2008-2010 SOI values are above. The period begins with an SOI indicative of a La Nina, with readings between 10 and 25 in the early months of 2008. This was followed by a significant drop off into negative territory and a rebound into positive territory. The following year included continuous plummeting values of the SOI, with a reading approaching negative 20 in early 2010.

The timeframe in question began similarly to 2008, with an elevated La Nina-status SOI. An abrupt falling of the SOI followed, and a rebound into La Nina territory. Does this look familiar? If you're thinking of the graph above and its similarities, then you are making the right connection.

If we use 2008-2012 to forecast for the next year or two as the two graphs are markedly similar, one would expect an increasing El Nino, rebounding into La Nina as we move into 2013. I personally do not want to forecast that far out just out of confidence issues, but I find it very interesting that these two graphs are so much alike, only enhancing the general 2009-10 analog for the upcoming winter.

Invest 99 continues to strengthen and become more organized as it makes its way westward towards the Caribbean.

Latest analysis of Invest 99 shows several clusters of strong thunderstorms, with the biggest cluster containing the center of circulation and main component of the invest. The center of Invest 99 does not have a defined circulation, and at this time appears only as an area with a cluster of strong thunderstorms.
Invest 99 is in a difficult spot, warding off expanses of dry air to the north and west of itself. This dry air to the west may pose development problems, but the GFS ensembles say otherwise.

The 12z run of the GFS Ensembles, or GEFS, shows 1008 millibar lines as well as 1048 millibar lines. The ensembles show that the invest may move into the Caribbean at 1008 millibar strength. Given, other ensemble members are likely stronger with the system while others are weaker, but for now this is what seems to be a good level to track this invest.

Andrew
By Andrew at 4:14 PM No comments: Links to this post