What I Expect For The End Of January

I have been talking a lot about the developing situation in the stratosphere, and have not really talked about what the end of January could be like. I think now's an appropriate time to do so.

The first thing to discuss is the stratosphere. As observed in the above animation, the month of January experienced two sudden stratospheric warmings- one centered over the Bering Sea, and the other (currently ongoing) centered over Canada. The ongoing SSW is the more significant warming between the two, with stronger and more widespread warming happening. With these sudden stratospheric warmings comes the movement of warm air. The basis of the SSW is anomalous warm air being forced up into the stratosphere, typically in response to some convection or torque-based event (there was a strong mountain torque event observed immediately prior to the ongoing SSW). With the forcing of this warm air is the weakening of the polar vortex, the driving force behind the Arctic Oscillation (AO), but that's a piece for later on. When you have large amounts of warm air being forced into the polar vortex, the vortex tends to go on a weakening trend. Depending on the strength and placement of the SSW, this weakening can be minor or catastrophic. This current warming looks to be enough to cause a split of the parent vortice into multiple daughter vortices.

In situations like these, I like to look at the polar vortex as an egg (bear with me on this one). When the SSW occurs and warm air is forced up, the polar vortex split can occur. Think of this as cracking the egg open, but not so far as to completely break it apart. The split of the vortex lets out a fair amount of cold air to lower latitudes but not the entire Arctic, similar to how a partial cracking of the egg leads to fair leakage of the inside contents but not the entire yolk.

Back to the relatonship of the SSW and anomalously cold air in the lower latitudes, there is typically a 1-3 week lag time. I prefer to use a 2-4 week lag time, because you're talking about thousands and thousands of feet to move air, and that takes time. Using that timeframe, and looking at the upcoming zonal-flow pattern ahead, I feel that the cold weather will be best felt beyond the third week of January, pretty much beyond January 20th. This will be of direct result from the ongoing sudden stratospheric warming, and the cold outbreak ought to last a good couple of weeks.

(Originally posted January 2) The GFS model is then pinpointing a third stratospheric warming in the long range, shown below:
Hour 384 is notorious for never verifying, but this warming forecast has been appearing on several GFS model forecasts, meaning the model appears more certain that this will actually happen, rather than not happen. The warming looks to originate over central Canada, right in the heart of a daughter vortice at that same 10 millibar level. That would only bring further weakening to the polar vortex/vortices.

If there is in fact a third sudden stratospheric warming (which I believe is definitely a possibility), there is no doubt that the amount of damage done to the polar vortex will lead to another, possibly stronger cold outbreak. The polar vortices can only sustain so much damage before another split into multiple vortices would result in a loss of the polar vortex altogether. That said, if a third SSW does occur, February would be quite a chilly month for many, as I have been hinting at for some time now.

Models also are tending to agree with the prospects for a sharp cold outbreak towards the end of January. The above forecast is of the CFS v2 long range model's weekly forecasts, with the top image valid for January 16 - January 22, and the bottom image valid for January 23 - January 29. In both images, we see sharp cold overpowering the nation, and significant warming ongoing in northern Canada. This significant warming bodes well for a ridge of high pressure in east Canada, something that could provoke a west-based negative NAO, which brings the party to the East Coast as far as cold and snow goes. However, considering the high variability between these weekly forecasts, I am hesitant to trust that negative NAO forecast. The cold has been trending on the CFS weeklies for a while now, so I am not as concerned for a bust potential in the cold as I am for the negative NAO. 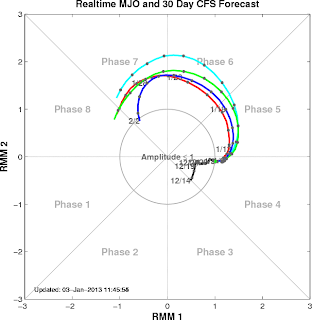 My concern rests in the Madden-Julian Oscillation (MJO). This is a forecast chart of the MJO, with the forecasts in colors and observed conditions in a gray-ish color. Note how all members are in fair agreement with the MJO cycling into Phases 5-7 with increasing strength as time goes on. This does not bode well for cold weather in the East US. On the contrary, Phases 5-7 are very favorable for warm conditions across the nation. Now, if the forecasts were weaker with Phases 5-7 (closer to the center circle), I would not be as concerned. But alas, the models are in moderate strength with the dreaded phases of 5-7. The MJO only tries to reach pro-cold phases 8-2 by the beginning of February, and even then the MJO starts to die off.

We have the ball rolling very well here, as far as getting the cold down to the US. The stratosphere is experiencing a very formidable sudden stratospheric warming, and that will get the cold down to the surface. The question is, can the stratosphere overcome the MJO to get that cold air to come into the US rather than other parts of the world? My answer is yes. I have a good feeling we will have a good negative NAO setting up in mid to late January as the split in the stratosphere is reciprocated in the troposphere by pieces of the polar vortex being displaced away from the Arctic Circle and allowing high pressure to build in that area. Greenland would also be affected by high pressure formation, and the negative NAO would form. I buy more into an east-based negative NAO than a west-based negative NAO at this time.