Significant Heatwave Coming for Western US

A significant heatwave is on the way for many in the Western United States in the next week to 10 days (and beyond??) 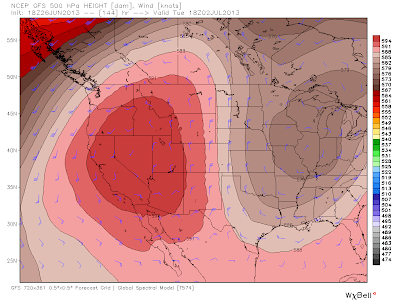 The atmospheric pattern over the Western US will become incredibly favorable for major heat in the next 5-10 days as the mid level atmospheric flow becomes very wavy (called meridional). A very large depression in the mid level heights over the Midwest, Great Lakes and western Ohio Valley will force a very large ridge of high pressure to build over the Rockies and entire Western US. With model forecasts indicating this large depression in the atmosphere to persist over the Central US, it is very possible we could be in for a prolonged significant heat wave over the Western US. 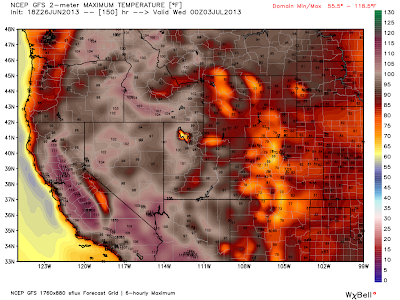 Temperature forecasts from the GFS model have large parts of California breaching the 100 degree mark, with the maximum value just below 120 degrees. It is expected that these hot temperatures will persist throughout the mountains in California, Arizona, Nevada, Idaho, Oregon and Washington state in a multi-day hot weather event. This all begins in the next several days, and could very well persist for several days.

Remember to stay hydrated and take multiple breaks if you will be outside during this heat event.

Andrew
By Andrew at 6:20 PM No comments: 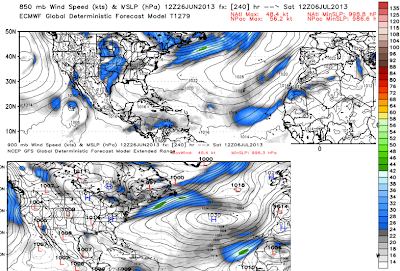 Two major global models are now indicating a piece of energy will move off the African coast in the next week or two that may provoke a tropical concern later on in July.

The above image shows the ECMWF model and GFS model forecasting lower level winds over the Atlantic Basin for 10 days out. Looking towards the African Coast, we see elevated values off the coast of Africa on both models. While the ECMWF model is considerably weaker with this piece of energy, it is apparent that there is interest in the long range models for the tropical wave train off of Africa to get going rather soon.

Andrew
By Andrew at 6:01 PM No comments: