The Storm Prediction Center has deleted the outline for severe weather on Wednesday into Thursday as the zonal flow of the jet stream ('zonal', meaning the jet stream is moving on the US/Canada border) is progressing several disturbances that are all equally hard to track. However, I still believe there is a severe weather risk associated with this potential. 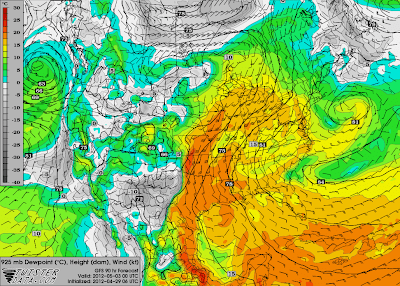 What we see here is a chart of 925mb dewpoints for 7:00 PM CDT on May 2nd. What I do when I see high dewpoints is look for equally heightened temperatures to indicate that the area in question is indeed under a warm sector of air- one that may produce strong to severe storms. As you can see, the GFS model has a wide swath of high dewpoints from Oklahoma to the Ohio Valley. However, I am more concerned with particularly the Midwest and South Plains, due to what seems to be almost a propulsion of higher dewpoints directly from Texas to the Midwest. I am concerned with the Southern Plains due to the extreme dewpoint gradient in western Texas and Oklahoma. 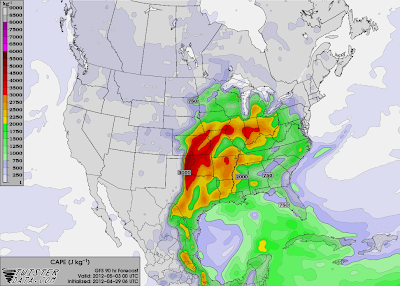 As explained, high dewpoints can indicate instability. The image above is instability values, and you can see just how intense this could get, with widespread values over 2000 units, sufficient for severe weather. As I had mentioned earlier, there appears to be a stream of high dewpoints from Texas directly into the Midwest. This is directly reciprocated into instability values from Oklahoma into Missouri and Illinois. I worry that early showers and storms may depress instability values, but it does appear that enough instability could be in place for some stronger storms later on.
Let's take a look at the GFS/ECMWF comparison of 850mb temperatures. First is the GFS, next is the ECMWF. Both are valid at 7:00 PM CDT May 2nd. 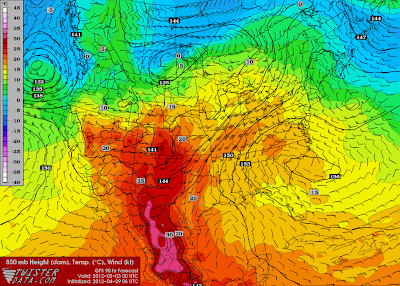 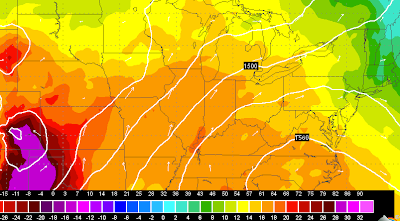 In summary, just because the SPC has removed the risk does not mean the risk is not there, because I do believe it is based on what I have shown above.