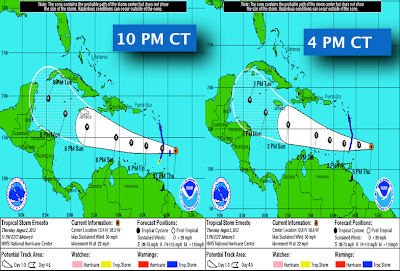 The National Hurricane Center has slightly shifted Tropical Storm Ernesto's track northward in the newest 10 PM CT update. The 4 PM CT update is slightly farther south, and thus has less potential to effect the US.

What does it matter that the track shifted north a bit?
Any slight shift will have dramatic results to the eventual landfall and intensity of TS Ernesto. In the 4 PM CT update, which was slightly farther south, Ernesto would have likely made landfall in the Yucatan Peninsula, and then a toss-up between the Gulf of Mexico's coast and Mexico for a second landfall.
In the newest, slightly north update, Ernesto looks to scrape the Yucatan Peninsula before shooting into the Gulf of Mexico. With this 10 PM update, my confidence grows that this may become more of a Gulf Coast threat than Mexico. Whether that verifies remains to be seen.

Andrew
By Andrew at 10:43 PM No comments: Links to this post

What To Look For In The CFS

Looking at long range forecasts can be difficult. Let's look at what the CFS v2 is showing this winter and see what we can decipher.

This is the CFS v2 forecast for 850mb anomalies in January 2013. Here we see warmer than normal temperature anomalies over the Northwest and extreme Southeast portions of the nation. Warmer than normal anomalies also exist over the Caribbean. So what does this have to do with anything?

Warmer than normal temperatures exist over the Northwest, which is usually a strong signal of a high pressure ridge in place over the region. The same ridge of high pressure rule may also apply over the Southeast and Caribbean. These two ridges could have very profound impacts on storm tracks for this winter. If one was to superimpose an estimated track for storm systems, this is what I would put:

I would estimate that the jet stream would be displaced north over the Northwest before sharply dropping down to the southern Plains. Following this drop, a turn northeast would be expected thanks to the ridge in the Southeast. Another storm track could follow along the Southwest, with systems ejecting into the Southern Plains before being picked up and shifted back across the main track through the Northeast.
If this were to happen, I would anticipate the Midwest and Ohio Valley getting in on the snowy weather. The question is, do precipitation forecasts for January match up with what I am projecting here? The answer would be yes, as seen below.

There are a number of things that can also be deciphered among other long range models, but this is all I have at the moment.

Tropical Storm Ernesto has formed in the Atlantic Ocean this afternoon. Satellite imagery indicates intense convection in the center and southwestern flank of the storm, with outer banding becoming evident, especially on the northern side of the storm. Additional banding is also evident on the eastern side of the tropical cyclone.

Tropical storm warnings have been hoisted in portions of the Caribbean as the National Hurricane Center forecasts Ernesto to move west-northwest before eventually making a northwest turn. During the northwest turn, strengthening to a hurricane appears likely.

If we look beyond the NHC forecast, landfall on the Yucatan Peninsula appears likely before the system exits into the Gulf of Mexico and churns there before threatening either Mexico or Texas. This will have to be closely monitored.

What Would You Like to Happen If We Reach 1 Million Page Views Before January 1 2013?

What would you like to happen if we reach 1 million page views before January 1, 2013?

As ridiculous as Option 4 sounds, I know some people would like to see winter forecasts as far out as 2020.

I am trying to make this into a poll on the sidebar, but as of now it's not working, so this is how I will run the vote for now.

Andrew
By Andrew at 3:04 PM 8 comments: Links to this post

Tropical Depression FIVE is disorganized at this time, with satellite imagery showing a jumble of scattered showers and thunderstorms that do not appear to be trying to converge. The center of this depression is characterized by the cluster of showers and storms, with what is likely to be either an extension or the beginning of outer banding to the southwest of the center. Let's take a look at what is affecting the storm right now.

Convergence is the bringing-together of moisture to create showers and storms. This commonly happens near a frontal boundary on land, when air is forced up and creates thunderstorms by a convergence of moisture. This can be applied to tropical systems. Looking at TD-FIVE, we see a large area of fairly weak convergence just north of South America. What I find interesting about this graphic is how the main area of convergence is located to the southwest of the center of the system. This displacement of convergence worries me that any upper air intrusion or dry air attack on the center of the system could quickly defeat any circulation evident.

Lower Level winds are posing an obstacle for significant development at this time, with 30 knots of winds attacking the depression in the lower levels of the atmosphere, particularly from the 950mb level to somewhere in the 700mb level. If a strong tropical system is to develop, one would want these lower level winds to die off to allow more significant storm development in the area.

The image above is of shear tendency over the past 24 hours. In a nutshell, if a tropical system is to form, one would need low values of shearing in order to get the most thunderstorm development. Looking at the chart above, we see about 20 knots of shearing where the depression is forecast to move. This does not pose a horrible challenge, but at the stance the depression is in, this could have an interesting effect on the depression's progress and potential strengthening.
What is more concerning is the shearing to the north of the depression, which is clocked at a strong 40-50 knots. This certainly poses a challenge to any significant formation on the northern flank of the depression, and there will likely not be any development in that area until shearing decreases. 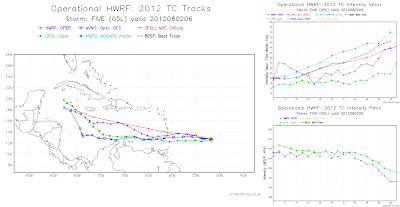 Short range models are projecting TD-FIVE to move nearly westward before gaining a general west-northwest movement that could eventually transition into a northwest motion. Strength forecasts do have the depression waiting a bit before gaining tropical storm status. I agree with this, as there remains issues with development in the depression.

What is much more concerning is the image shown above by the GFS Ensembles (GEFS). The GEFS is showing lines that denote strengths of 1000mb systems of 1040mb ridges. In this case, it is 1000mb. As you can see, there are many circles in the Gulf of Mexico. This denotes the presence of Tropical Depression FIVE, which may very well be a tropical cyclone at this time. Some of the circles are larger than others. This indicates that the ensemble member believes that the storm system will be stronger than other members with smaller circles.
This is extremely concerning, as it presents a clear threat to the Gulf of Mexico with a possible landfall of a tropical system. There appear to be three possible tracks that the GEFS members are taking:

Either one of these tracks could have a profound effect on life and property, and all possible options will have to be watched closely.

Andrew
By Andrew at 10:56 AM No comments: Links to this post