The lower parts of the stratosphere are beginning to warm up, with the 70 millibar level now nearly at normal levels.
This warming trend now puts the stratosphere in a position for general cooler than normal conditions and what would be snowy conditions in the winter time.
Based on historical data, the stratosphere will likely keep around the normal line before dropping down again for winter. Things are certainly getting interesting! 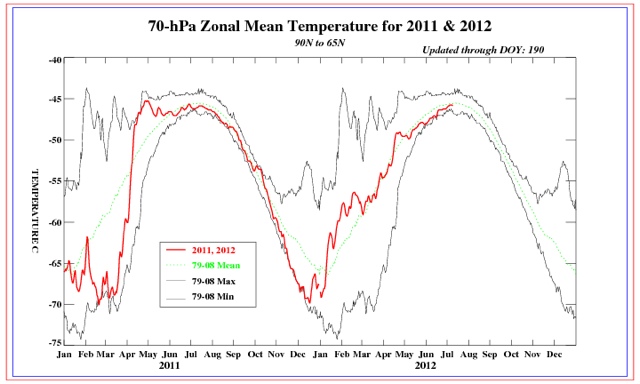 An area of much above normal temperatures has been outlined for the Midwest and Great Lakes for mid July as the heat looks to make a possible resurgence into the eastern part of the nation. There are varying forecasts on the Madden-Julian Oscillation forecasts, which could dramatically alter the weather depending on phase and strength of said phase, and the models are just not sure on what phase we will be in come July 17th.

Andrew
By Andrew at 2:40 PM No comments:

Hurricane Emilia has rapidly strengthened to a major Category 4 hurricane with a minimum pressure reading of 950 millibars and winds up to 130 MPH.

Emilia is definitely showing off on satellite imagery, with a fairly defined eye and solid core of stormy activity wrapping into the storm. Circulation looks quite strong judging by how far the outer bands are from the eye of the storm. While the eye is not as significant as a major hurricane would typically have, it remains an impressive system.

Ensemble forecasts indicate steady weakening from this point on, eventually into a tropical storm a few days from today. This theory is supported by the system moving into some shearing that will likely add to lower water temperatures to prove that Emilia is not immune to a bad environment.

Andrew
By Andrew at 2:25 PM No comments:

The Southern Oscillation Index is now defined as 'Rapidly Falling' as we enter June and begin to see sea surface temperatures warming in accordance with this new SOI development.

At the time this graph was plotted, the SOI was at -10 or so, which is characteristic of an El Nino. El Ninos are traditionally present when the Southern Oscillation Index is below -8, and La Ninas are indicated at 8 or above. At the time of writing, the 30 day average of the SOI was around the -10 to -12 mark, continuing to show a rapidly declining SOI.

The latest temperature anomalies show El Nino temperature values across the eastern section of the ENSO monitoring area, which would essentially indicate an east based El Nino. This would indeed indicate a correlation with the SOI into the conclusion that there is an El Nino currently ongoing.

The direct effects may take a bit to come to light, but there does appear to be an El Nino-favored atmosphere.

Andrew
By Andrew at 2:08 PM No comments: