The ECMWF has come out with a monster low in Michigan and wickedly cold air behind it. This is valid at Hour 240 of the new 12z ECMWF today.
It appears a low pressure system will make a presence in Texas after coming from the Southwest region, but we are not totally sure if that is what the ECMWF portrays. After the low is present in that region, the low pressure system moves in a NNE direction, pulling massive amounts of cold air behind it as the storm system makes its way into Michigan. These cold temperatures are originating from the deep heart of Canada, where temperatures know no bounds. The system appears to be supported by a ridge in the east US/offshore the Southeast coast. This system would be pulling warm air into its system and helping sustain the system. If this was to verify, I could easily see Oklahoma to NW Illinois getting in on some snowy action.
We are closely investigating this system for any flaws and will alert you on our Facebook Page if there are any developments.
By Andrew at 3:34 PM 15 comments: Links to this post

We will NOT be issuing a new discussion on the December 3-5 storm system. This is because the discussion from yesterday remains valid as of right now.
Click here for yesterday's discussion.
By Andrew at 3:23 PM No comments: Links to this post 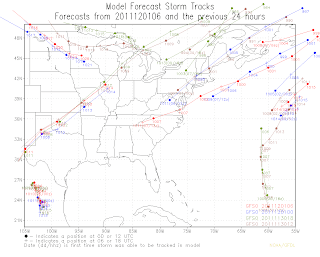 The GFS model has begun a shift southeast. Using the color key on the bottom right, it can be determined that the GFS has indeed been moving in a southeast direction. The NCEP ensembles are moving southeast as well.
Something we are watching and will publish in a full discussion that will be out at 4:30 this afternoon is how the models are holding some of the storm's energy back that may eventually track farther to the southeast than what the first storm's track currently is. Essentially, this means 2 storms would be in the making, and that appears the situation that is unfolding.