Ensemble Models called Spaghetti Models have shifted westward over the course of today. Emily has become stationary over the Hispaniola area. Below is critical information regarding Emily.


Emily is indeed stationary over the Haiti region, providing a life-threatening situation for thousands of people. Should Emily remain stationary, she could induce a truly horrific flash flooding event in Haiti, even as victims of the January 2010 earthquake remain living in tents on sides of hills, where landslides could occur.
Those spaghetti models above have all shifted west. Some have really moved west into the Gulf of Mexico, but most have shifted a fair amount west, with some models making landfall on Florida now.

Despite this, the National Hurricane Center (NHC) has actually shifted their own track east as other models turn west. The Weather Centre believes this is still on the table, but with Emily stationary, it is unknown what could happen next at this time. 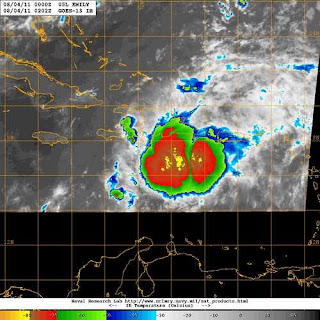 We see the COC is exposed, however recent observations indicate that convection is firing over the stationary Emily, which could be a sign of strengthening and big organization help.

We will continue watching Emily for further information, and you can count on us for timely updates on TS Emily.
By Andrew at 10:00 PM No comments: Links to this post

We are sorry for not being able to post any TS emily updates as we were out taking beautiful pictures for you, the viewers.

Emily's track is still very close to Florida and the East Coast. Tropical Storm winds are to the north and east of the center of circulation (COC). Tropical Storm warnings remain up in Haiti and surrounding areas, with tropical storm watches farther up north. 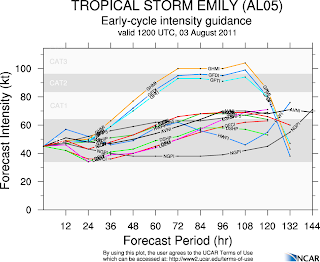 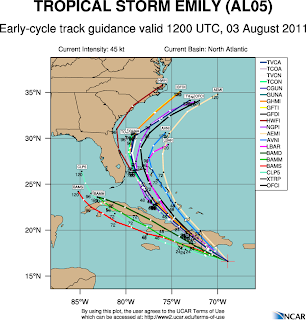 Ensemble forecasts remain mostly to the east, but some models prefer a track towards the Gulf of Mexico. Intensity Forecasts range from Category 3 to Category 1 strength.
There is also a chance for landfall on the states above Florida. Click here for the loop of the storm track.
By Andrew at 10:00 AM No comments: Links to this post