It now appears that the 10 millibar layer of the stratosphere has experienced a collapse of the polar vortex.

The above image shows a 6 day observation period of the stratosphere, with the first three days shown on the top half of the image and the most recent three days observed on the bottom half of the multi-panel image. You can see that recently, instead of two areas of yellows and greens, there is now one. These circles of brighter colors show the polar vortex, split into multiple vortices as a result of a phenomenon known as the sudden stratospheric warming.

In a sudden stratospheric warming, warm air is suddenly forced up through the stratosphere at varying degrees. The animation of the 10 millibar layer above (same atmospheric layer as the top image) confirms that we have seen (and continue to observe) a historic sudden stratospheric warming that has broken daily maximum stratospheric records. All that red on the image is unusually warm air. See how it can't be contained in the Arctic and has actually now gone into the East US? That's how strong this warming is.

Now, this collapse has some positive consequences for February, as far as winter prospects go. The collapse of this layer means other layers of the stratosphere are now also more prone to collapse, something we may see in the 20 millibar and 5 millibar layers. However, that's about as bad as it'll get- in the stratosphere. Down here in the troposphere, where we live, cold air is now provoked to move south and may have to spread to lower latitudes. It's a give and take scenario- warm air goes in the stratosphere, thus cold air is displaced down into the troposphere. If we can continue to see weakening (or even collapse) of the polar vortex at other levels, cold air becomes increasingly likely for the end of January into February, and I already have some indicators rooting for a very cold February.

Andrew
By Andrew at 2:50 PM 7 comments: Links to this post 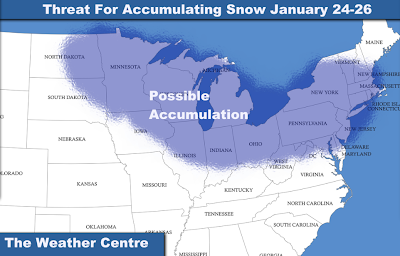 I am monitoring the threat for accumulating snow from January 24th to January 26th.

The GFS and ECMWF models are now hinting at a strong storm system crossing from the Central Plains east into the Midwest or Great Lakes. At the moment, there is a difference between the two, with the American GFS model taking the system into Chicago and the European ECMWF model taking the system into the US/Canada border in the Western Great Lakes. The map I drew above went by the GFS model for the sole purpose of covering all possibilities as far as who has at least a chance of getting snow at the moment. If this storm does happen and the models are correct, I would expect a good accumulation event occurring in the North Plains and Upper Midwest, possibly in the Great Lakes. The GFS model shows a fair accumulation event above 4 inches for some people in the Northeast, so that threat will need to be monitored. 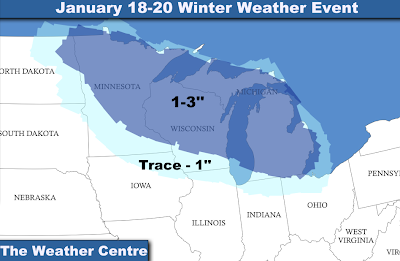 A clipper event appears likely for parts of the Upper Midwest from January 18-20, 2013.

At this time, model forecasts have a disturbance pushing through southern Canada and possibly into the Great Lakes, with some weak accumulating likely to also move into the region. As the system pushes through, temperatures will rise to the freezing level in central Illinois and southern Iowa in response to the incoming clipper system. However, due to the typical lack of moisture in clipper systems, this will not be a significant event. I expect anywhere from a trace of snow to 1 inch of snow in the light blue areas, and possibly as high as 3 inches of snow in very isolated areas of the dark blue areas.

The new snow day potential chart has been made, and is shown below for this timeframe: 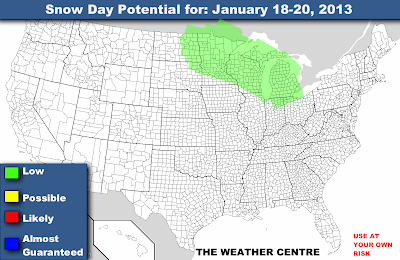