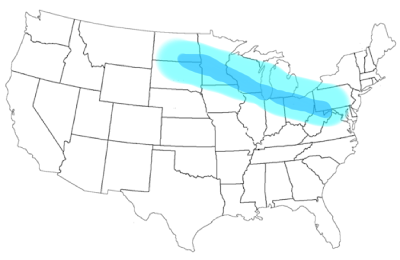 Here is my forecast for the potential for some flying flakes and even a little accumulation going into the weekend. Keep in mind that this has been based off the latest model trends and does not account for a single forecast, rather multiple forecasts.

Light Blue: I am expecting the potential for some flying snowflakes to make an appearance in this area. The system will be a clipper system, so some cold temperatures are possible during and slightly after the system comes through. Little to no accumulation is expected. Slick roads are possible, if a cold rain makes an appearance as well.

Darker Blue: I am considering this area the 'target zone' of this clipper. Maximum amounts should end up to 2 inches, as this snow will be heavy, thus using up more water and moisture than would be used in January or December.
By Andrew at 3:58 PM 13 comments: Links to this post

Sure-Fire El Nino Next Winter? Not So Fast.

Many climate models are predicting an El Nino following the double dip La Nina this year and last year. While a neutral to weak El Nino (possibly moderate) is likely, the forecasts for a super El Nino will most likely not verify, and here's why.

Here is the past analysis for the Pacific Decadal Oscillation, or PDO. It is recognized by either a warm or cold temperature anomaly in the northern Pacific. Likewise, there are warm and cold phases, respectively. Right now, based on the above image, we are, and have been, in a cold phase. This means an increased likelihood for La Ninas. However, as observed in 2009, that is not always the case, hence the 'increased likelihood' part.

This is the PDO forecast out to 12 months off the ESRL's LIM long range model. As you can see above, we are projected to remain in a deep negative phase from now until at least March 2013. But let's not get ahead of ourselves. Long range forecasts can be ticking time bombs of failure, or fairly spot on. There is barely, if any, room for forecast success 12 months out.
I ran over some verification scores for 3, 6, 9, and 12 month forecasts off this LIM model. I got 81%, 67%, 55%, and 41% verification for those respective forecasting periods. Now, don't get me wrong here- 44% is a very high verification rate for a full year out. However, it does not ensure confidence.

All I am saying here is that those going for a super El Nino for the upcoming winter (I haven't heard any of those forecasts, but I'm bound to run across a couple sooner or later) should take a look at how strong the negative PDO will be and how it could very well tamper the possible El Nino down to a neutral or weak Nino year.

Andrew
By Andrew at 3:50 PM 3 comments: Links to this post