It's looking more likely that we'll see a severe weather event over the southern Plains. 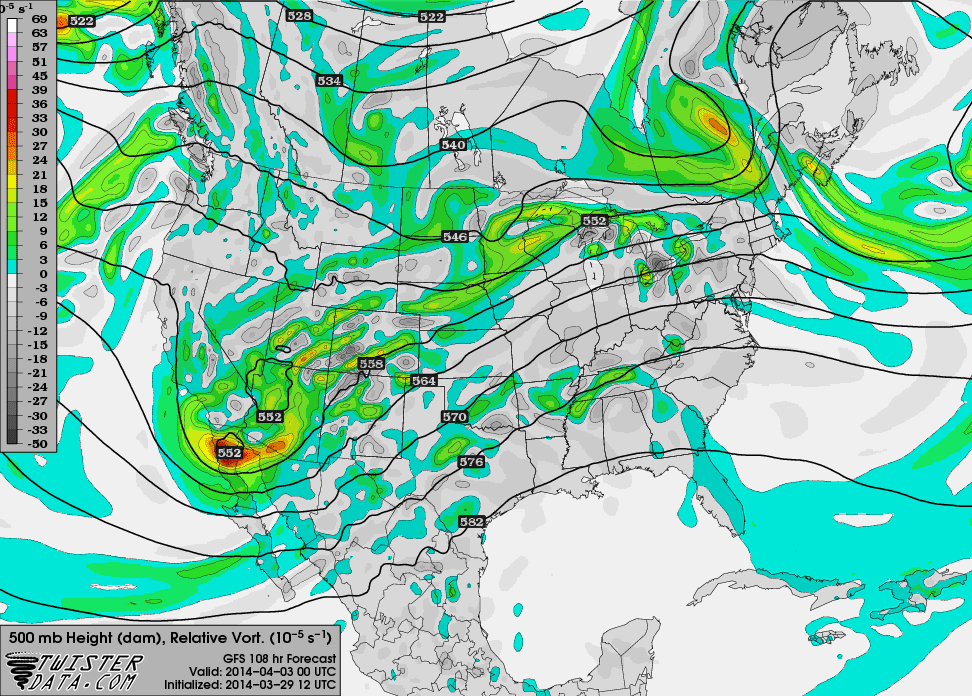 An upper level low will push eastward into the Southwestern states at the beginning of the workweek, reaching far northern Baja California by Wednesday evening, as the 500mb relative vorticity and height contour map shows above. We see that the maximum vorticity is not 'tilting' in any particular way, meaning it isn't pointing towards the southwest or southeast. Instead, we see the contour lines rather symmetrical around the upper level low, signifying a neutrally-tilted storm system.

As the graphic shows, there are two types of tilts to a trough- positive and negative. The positive tilt trough sees the jet stream bending towards the southwest, as the Energy Pocket, also known here as the 500mb maximum vorticity, pushes in that direction. The negatively tilted trough indicates the system has reached maturity, as the vorticity maximum now pulls the system to the southeast. The mature storm now produces more vigorous storms, hence why we are concerned more when a negatively tilted trough comes around, compared to a positively-tilted trough.

When looking back to the GFS model forecast at the top of this post, we can now confirm that the storm is at a neutral tilt. This means it is stronger than the positively-tilted storm, but not at the mature level that is defined as a negative tilt. Because the upper level trough is of a neutral tilt, we still have to be concerned about the formation of a capping inversion that must be eroded before the storms can commence.


This graph might look complicated, but we're only going to look at the circled portion. The red line represents temperatures, and the green line depicts dewpoint. The lines bend and move as you move up the graph, as they show temperatures and dewpoints with height- the height legend is located on the left side of this chart, in hPa (interchangeable with millibars). If we start at the surface, at the bottom of the graph, we see how temperatures begin to decrease with height. This indicates instability, as warm air rises and cool air sinks. However, we suddenly arrive at a point in the atmosphere, around 850 millibars, when the temperature warms quickly and the dewpoint drops. This means the air from the surface that had been rising can no longer rise, because temperatures have now warmed above what they were a bit lower below this circled portion. Thus, thunderstorms cannot form. This phenomenon is the capping inversion. The capping inversion can be broken, as the warm temperatures in the circled portion are cooled down. When they cool down enough, the capping inversion is broken and thunderstorms can now freely form. A 'broken cap' is shown well in this example graph below.

In this graph, we no longer see the sudden warming of temperatures. All we see is a steady cooling in temperatures throughout the troposphere, which tells us the cap has broken, and thunderstorms are free to form.

There actually is a very slight capping inversion in this graph, too. Can you find it?

If you guessed it was located at the very bottom of the red line, you're correct. There is a slight inversion at the surface as temperatures warm a bit before rapidly cooling. The red line breaking to warmer temperatures only slightly signifies a weak cap that should be easily broken.

With our neutrally-tilted storm system, we're going to need to break the cap, but when that does happen (which it will), the fireworks will begin. 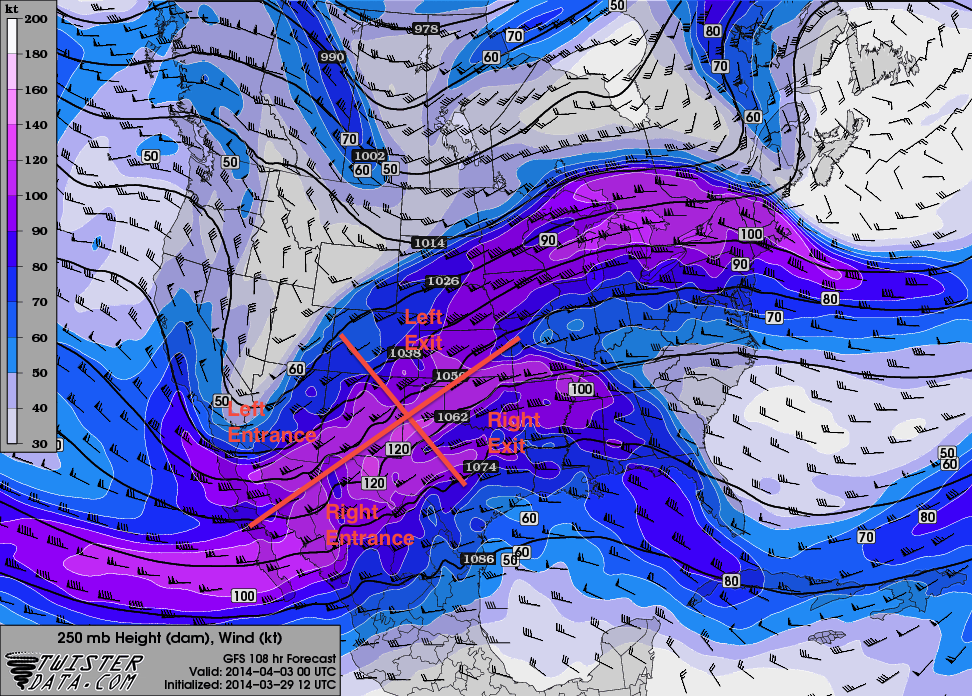 This image shows the GFS jet stream forecast for the evening of April 2nd, when we expect this severe weather event to occur. In this image, I separated the jet stream into four sections. We have the 'Left Entrance' region, on the bottom left part of this diagram; the 'Right Entrance' region in the bottom right; the 'Left Exit' region in the top left, and the 'Right Exit' region in the top right area. The severe weather event looks to be located over the Right Exit region, and being in the Right Exit region is a big deal. 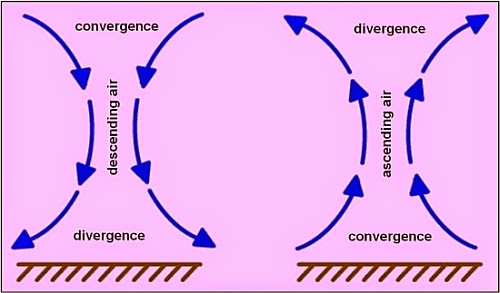 In the Right Exit region, we see divergence aloft, meaning air is being pushed up and outward, as the diagram above shows. This divergence acts as a helper for the formation of convection, including (but not limited to) thunderstorms. Even in winter, being in an area of divergence allows for the formation of snow. If the divergence is strong enough, thundersnow can occur as well (with other atmospheric conditions cooperating, of course). For our severe weather event here, with the divergence centered in the Right Exit region, I'm closely watching Oklahoma, Arkansas, and portions of Missouri and Texas for severe weather this Wednesday, April 2nd. The Storm Prediction Center had outlined that area yesterday, but revoked the outlook today due to model disagreement. Despite this, the indications are there that we will see the season's first formidable severe weather event on April 2nd.

Andrew
By Andrew at 6:06 PM No comments: Links to this post