It does appear we will see a shift in the atmospheric pattern in the next couple of weeks, as the hyperactive typhoon regime in the Pacific tapers off in response to a changing Madden-Julian Oscillation.

This graphic, provided by the NCEP, shows a composite of tropicalcyclones that have formed in the month of October by each phase of the MJO. The graphic indicates that typhoons tend to reach maximum occurrence in phases 5-7, and taper off as the MJO rounds out its later phases. We have been in Phases 5 and 6 for nearly a full month now, which explains why the last few weeks have had remarkable typhoon formation in the Pacific. Among those that formed in the last ~30 days were:

These typhoons have come from the MJO being restricted to Phases 5 and 6 in the last month. However, the latest European forecast for the MJO shows gradual progression into Phases 7 and 8, phases which are shown by the NCEP graphic at the top of this page to include a tapering off of the hyperactive typhoon regime in the Pacific.

All of these typhoons have to go somewhere, and they go north into the Bering Sea and general northern Pacific. With these extratropical storms in the northern Pacific, they then propagate down into the West US and western Canada, where they dig deep into the Western US to provoke ridging of high pressure in the East US. As long as the typhoons continue to form in the western Pacific, there is little that should alter this pattern for at least the next several days. The MJO forecast above indicates the formation of typhoons will lessen after these next several days, but until then, the prospect for warmer weather in the East for as long as the next week appears very possible. The main point to get out of this typhoon discussion is that the warm weather will wind down as the typhoons wind down, and that should happen in the ~7-10 day period.

We're going to stay in the west Pacific and move our discussion into the East Asia region. The last couple of days have seen a massive ridge building up across East Asia that is just now beginning to weaken and pull east into the Pacific. Those who have followed this blog for a long time understand that there is a 6-10 day correlation between height anomalies in East Asia and height anomalies in the East US. Hence, this massive ridge in East Asia will translate to ridging in the East US in just over a week.

The ECMWF model (left) and GFS model (right) nail this correlation in showing a massive ridge across eastern Canada and the East US in the 8-10 day forecast period. This ridging in the East does something that the ridging in Asia couldn't do- it propagates north and into the upper latitudes. Both global models project that this strong high pressure in the East will exert tremendous influence on the pattern in and near the Arctic Circle in what could become an upper latitude blocking pattern. Long range GFS ensembles project a steadfast negative NAO developing due to ridging across Greenland, and a cool pattern then takes place over the Plains before gradually shifting east. It does appear the cool Plains/Midwest idea should end up verifying, and as long as the East US ridging stays on track to flow north into Greenland, the negative NAO should work out as well. Projected rising of the Pacific-North American index would certainly help cool Plains prospects in the long range in addition to the -NAO: 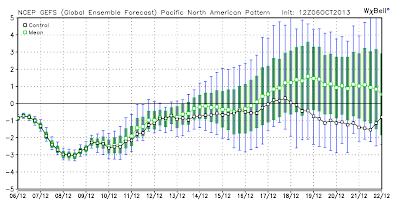 Summarization
The Eastern US will encounter warm weather for the next week to 10 days before the threat of any big heat moves out and seasonal-ish temperatures move in. The Plains will remain seasonal to slightly below normal as another storm system is projected to swipe the Central Plains and hit the Northern states. An overall cool down is anticipated beyond the 10 day forecast point. The West US will be inundated with cool weather for the next week and a half before rising temperatures make their return.

Andrew
By Andrew at 7:07 PM 4 comments: Links to this post