Tomorrow, we will see low pressure move across Arkansas. This will be connected to a stationary front to a low in Texas as well as a low in the Carolinas region. Some precipitation will exist around the Arkansas area, but it does not appear a severe weather event will develop.
Until tomorrow morning. Significant pressure differences to start with will provide some ignition for these storms. The tornado risk indicates some tornadoes should occur, as well as a significant hail event. A strong lifting mechanism will be needed.
The reason tornadoes may be likely is due to a high Bulk Shear- Effective value. If the values are between 25-40 knots, that is when supercell probabilities begin to start. In recent times tonight, even before the supposed outbreak, the Bulk Shear was up to 55 knots in some places of the severe weather risk area. By the way, that risk area is in Southeast Oklahoma into South Arkansas. Below is an image of that risk area.

As stated below, temperature differences over the South Arkansas area could make the scene intense. We will definitely have to watch this unfold as it may happen into the early morning hours.
Back in the Rockies, low pressure will create for a mix of snow and icy conditions across the mountainous region. Avalanche risks may be on the rise, so be careful if you ski in those areas.
A strong low pressure off the coast of Washington will create yet another messy day tomorrow. It will be carrying an occluded front. That said, the atmosphere is expected to be somewhat capped, limiting some thunderstorms. However, with the ocean moisture, this will be hard to tell.
Temperatures will be cool to cold across the northern tier of the US.
By Andrew at 9:27 PM No comments: Links to this post

According to recent infrared imagery, cloud cover is deepening over the projected severe weather area in South Arkansas and Southeast Oklahoma.
Radar does not indicate any precipitation is currently falling, but it does appear updrafts of humid air into the atmosphere, creating clouds are beginning to occur.
Thus, The Weather Centre is issuing a discussion image. 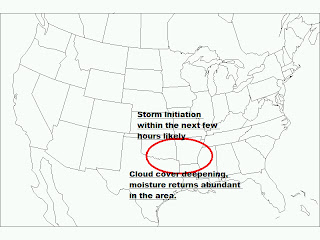 Recent upper-air returns also indicate humidity values are extremely abundant throughout the area noted, and precipitation that falls will be fed nicely with the moisture.
Effective Bulk Shear is in the 50-55 knot range, when supercell favoring environments begin at 25-40 knots.
However, 300 millibar upper air maps are showing fairly low winds. (300 mb winds, when above 100 knots on a map, can indicate storm development.) The maximum winds currently occurring over the above area are between 70-110 knots. However, the outlined area is on the edge of those winds, likely putting that area in the 70-90 knot area.
Overall, some ingredients are not in place for storms.
By Andrew at 6:26 PM No comments: Links to this post

Exciting Changes will be occurring at The Weather Centre in the upcoming days ahead.
As we transition into the severe weather season, specialized maps will be coming out detailing severe weather risks.
The names are not yet known, but they will be very modern and informative.
By Andrew at 4:24 PM No comments: Links to this post 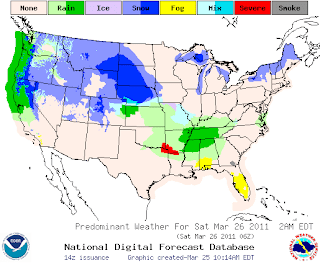 Low pressure across the Arkansas area will provide the stage for a severe weather event.
This severe weather event is not projected to be significantly severe. Looking at the top image from the NOAA, there is only a small area of severe weather forecast. Looking at the RAP Weather image, the low pressure will be aligned in Arkansas with that area of rain intensifying.
The trough may be the ignition for the storms. However, there is also the possibility the cold front will catch up to the warm front and create severe weather. We will just have to wait and see.
Below is the overall SPC risk area for today.

Judging by that image it appears the low itself may be the trigger for the severe weather. Below are the risks of tornado, high winds and hail in order.

It would appear that, whatever storms develop, they would have a good lifting mechanism that would produce hail as water droplets must be thrown up into the air far enough that they freeze into hail.
The tornado risk is somewhat elevated, potentially due to that lift. The wind risk is not abnormal but may also be enhanced by the lift. It seems to all come down to the lift.
By Andrew at 10:29 AM No comments: Links to this post

March 25 Rest of the Day Forecast 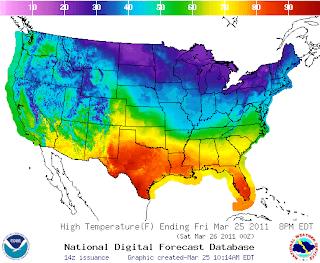 For the rest of today, low pressure system over Oklahoma will be accompanied by a trough pointing northwards. That trough should be the initiation of some showers and snow showers as they pass through. The low pressure will also put in energy to assist the development of this precipitation.
There will be a risk of severe weather today which will be outlined in a post soon. It does appear a warm front will be the result of the severe weather.
Today, warm temperatures will exist across the South US, but accompanied with clouds as the low pressure passes.
Low pressures over the Rockies will create mountain snows and rain in lower elevations. A storm off the  West Coast will also begin to create problems along that area.
By Andrew at 10:16 AM No comments: Links to this post