Preword: The Long Range Lookout issued a few days ago is void. This is a replacement post.

The first part and last part of February should be the final pushes for winter, while the middle of February appears to be lost.

The last 40 days has brought the Madden-Julian Oscillation to Phase 8, the phase most commonly associated with winter snow and cold. We have indeed been seeing pushes for cold and snow into the States, most recently with a snowfall event that hit areas across the Midwest, helping their snow drought. Medium range forecasts indicate a continuation of these snowfall threats, with an additional several inches possible across portions of the Midwest and especially the lakeside areas of the Great Lakes.

Long range forecasts portray a Rex Block setting up across the West Coast, with high pressure squeezing into the Pacific Northwest and low pressure residing in the Southwest. The European forecast for this event is on the left, and the American's forecast on the right. The European model predicts high pressure developing across the East US in response to this Rex Block. I do not feel that is the likely scenario; Rex Blocks are more known for producing a more zonally-oriented flow east of the block. I prefer to side with the American model on this one. Low pressure persisting in the Bering Sea is indicative of a positive WPO pattern, something that does favor the European model over the American with warmer temperatures spread across the nation in a positive WPO regime. However, the Rex Block should affect the synoptic US more than the positive WPO, although periodic ridges and warm-ups are definitely within the spectrum of reality. That persistant low pressure anomaly in the Southwest will provide a base for storm threats across the nation, but with my predicted lack of high latitude blocking across Greenland, these storms should take more of an inland path, rather than one going up the East Coast. The long range is more supportive of a solid blocking pattern, but I would rather stick to the more inland tracks for now. These inland tracks may not support snowstorms as a byproduct of the Rex Block (and its zonal flow) is a warmer air mass overall.

Looking ahead into the very long range, into late February, we see that the second image in the first column is predicting strong negative OLR anomalies in the last week or two of February. Negative OLR anomalies are most commonly associated with enhanced convection, and this leads to the predicted Phase 1-2 stages of the Madden-Julian Oscillation. Do not think that this Phase 1-2 regime will continue through mid-February- this would be a sudden rebound event from less favorable conditions in the MJO. 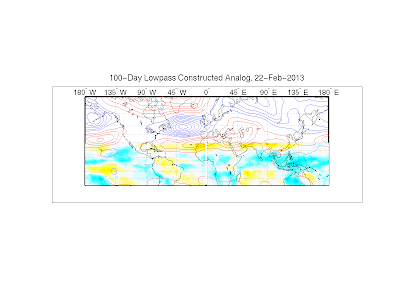 A constructed analog forecast of the OLR anomalies in late February enhances the forecast of the early MJO phases in the late month. One can see the deep blues across the Indian Ocean east into extreme western Pacific waters. These deep blues once again exhibit negative OLR anomalies, and they would be placed in a location suitable for borderline Phase 1- Phase 3. These three phases do support low pressure along the East Coast, but also high pressure in the Rockies that could spill over into the Central US. 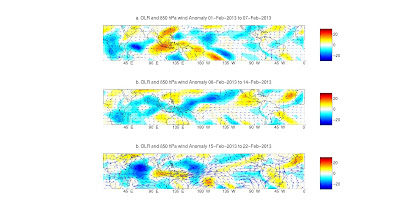 A third long range OLR and 850mb wind forecast from the Roundy MJO page (the above 3 images are from that same page) once again confirms suspicions of deep tropical convection in late February in the bottom-most image. The arrows depicting 850mb wind motions reveal strong westerly winds centered over the Indian Ocean, something that does support tropical convection formation and sustainability. Some models that project the Madden-Julian Oscillation have been hinting at a circling pattern occurring within Phases 8-1 in coming days. While this could indeed happen as exhibited by the analog forecasts and the image just above, I'm not that open to speculating on it, as it is multiple models versus the European suite, something I don't have the confidence to inspect and choose my favored solution.

On a related note, the MJO in Phases 1 and 2 does not favor blocking in the higher latitudes of Greenland, for those of you wondering why I support more inland tracks.

A strong Kelvin wave is currently moving east across the Equatorial Pacific. This Kelvin Wave will result in enhanced warm water anomalies across the ENSO area, which can lend itself to cooler weather in the nation as February progresses. This event will be analyzed more in coming days.

I'm hard pressed to rule out the end of February as a stormy time period, but I'm also hesitant on cold weather for those same dates. It is very apparent we will see chances for snow (likely accumulating in a few cases) as the month drags on, but as the sun begins to strengthen as winter begins to end, it's very possible some systems may just not be able to hold onto the cold air long enough to allow snow to fall. This concern will be addressed in coming days.

Andrew
By Andrew at 3:47 PM No comments: Links to this post

This severe weather outlook has been revised for details and a reconstructed forecast using the best methods I am able to confidently use. The following information is put forth in the utmost confidence with recognition that this forecast does indeed have potential to make some disappoints for verification.

Hello everyone, I am here to bring you the detailed forecast for this severe weather season. We'll get right on it with my analogues. 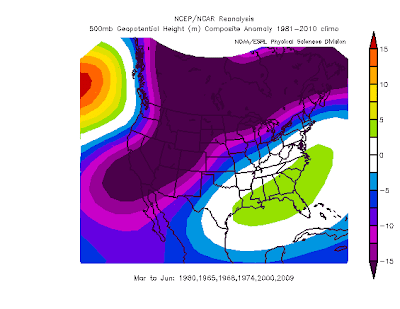 We start with geopotential heights at the 500 millibar level for years that had a La Nina early in the preceding year turning into a neutral or slight El Nino winter, again in the preceding year. Also included were years following solid negative Pacific Decadal Oscillation (PDO) years. Looking at the geopotential height anomalies for these analogue years, we find a gigantic swath of below normal height anomalies across the entire West US, including the West Coast and Rockies. The Upper Midwest is also included. More significant than this is the presence of that light green color in the Southeast. This is known in the weather world as the 'Southeast Ridge'. The Southeast Ridge is literally a ridge of high pressure that forms in the Southeast and provokes storms to stay further north in the southern Midwest rather than going through the Gulf Coast. Seeing this in place enhances my initial thoughts that storms will indeed take this track that sends storms (and severe weather) up into the Midwest and Plains. 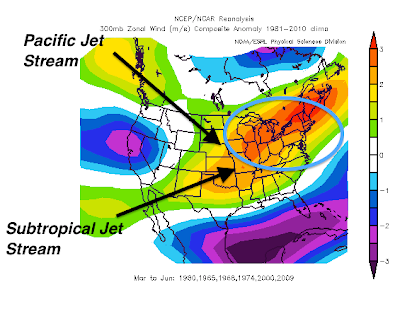 This analogue image involves the same years as were used in the first image, and for the same spring months. This time, however, the image displays zonal wind anomalies. Zonal wind anomalies just means wind anomalies from west to east. These zonal wind anomalies are valid for the 300 millibar level, which is where the jet stream lies. For those unfamiliar with the upper wind dynamics, when you have the jet stream over you, severe weather potentials are enhanced. However, there is a very special incident that happens when the two main jet streams cross. You see, there are actually two separate jet streams- the Pacific Jet Stream is the one that determines how far south cold weather goes, and directs storms that come from the Pacific. The second jet stream is the subtropical jet stream, and this is the one that really gets the Gulf moisture flowing and pumps up severe weather in the South US. These two jet streams can actually merge into a single, very powerful jet stream in response to a strong storm system. To show just how powerful these merges can be, some of the worst severe weather outbreaks have happened in the midst of merged jet streams. Now imagine if these jet streams merged multiple times during the spring, and you can guess what that means. I pointed out both streams in the above image, but then circled an area of very high wind anomalies in the Midwest and Northeast. Inside this circle is where the jet streams have merged, and thus where I would expect the highest instances of strong to severe weather. Not necessarily the most tornadoes, but a general higher chance of more severe weather events. 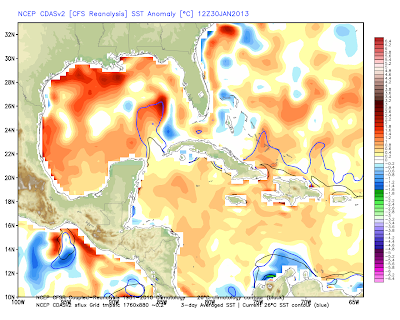 Another item to closely watch is the sea surface temperature anomalies in the Gulf of Mexico. As we all know, an important item in all severe weather situations is ample Gulf moisture. Naturally, in above normal water temperatures, moisture is increased as air is inspired more frequently to rise in the face of warmer than normal waters. In a similar aspect, with above normal moisture in the Gulf, storm systems will then drag more moisture north onto land, that then aids in providing instability for severe weather. What this higher moisture also does is enhance heavy rain potentials, as higher moisture saturates the air, thus allowing more rain to fall in weather systems.

Finally, we have to address the ongoing severe drought that is hitting much of the country. The ongoing drought does exactly the opposite to the effects the additional Gulf moisture has. The drought makes the land so dry that evaporation cannot occur. Thus, when storm systems enter the region highlighted in reds and maroon colors, they will not be able to grab moisture from the ground and cannot produce as strong of storms as would have been produced if the drought was not in place. Also, the drought creates warmer than normal weather over the Plains. Because little evaporation is occurring, clouds struggle to form. This lack of cloud cover enables the sun to shine on in a vicious cycle that supports long-term droughts. The warmer than normal temperatures can then create something called a baroclinic zone, which just means a temperature gradient. That is, the warmer, drier air can create its own air mass that can collide with the more temperate air mass out east. When storm systems plow through, it would not be uncommon to see these conflicting temperature masses enhance severe weather potentials. 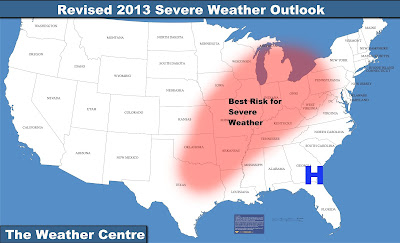 I anticipate the best risk of severe weather to be over the Southern Plains, Midwest and Great Lakes. This comes as a result of my analogue years predicting strong merging of the jet streams over this region, as well as the presence of the infamous Southeast Ridge. I did mark the Southeast Ridge with an H in its respective region. Now, if you're wondering how often these outbreaks could be and how often we could have them, that's a whole other story. There will certainly be a period of a few weeks where some strong storm systems could very well bring about some solid severe weather outbreak potentials, but that's all that is known at the moment.