The atmosphere could very well shape up into a situation that mimics the set-up that occurred on Christmas Day, 2012. The 500 millibar map from that day is shown above. We can see the storm system pushing down well into the Southern Plains, as depicted by the word 'Low' on the map. The national atmospheric flow appears not too disturbed in the East, with the exception of a weak ridge of high pressure in the Southeast. Stronger high pressure stands its ground on the West Coast, and this is the factor that typically allows storms to move east-northeast to affect the Midwest and Plains. The Southeast ridge also supports this. 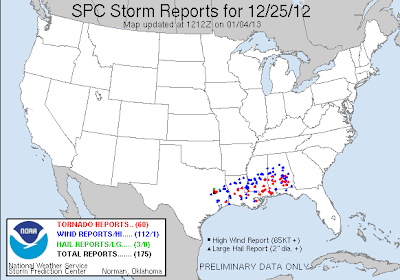 We all know how that day turned out. Many Christmas celebrations were interrupted by wailing tornado sirens as a tornado outbreak hit. It started in Houston, and ended the day in far eastern Alabama. Along the way, 175 severe weather reports were submitted to the Storm Prediction Center, 60 of which were tornado reports.

I find it plausible that such a situation could indeed happen again, on Valentine's Day. The Lezak Recurring Cycle, which is a repeating weather pattern that occurs through the fall into spring, has a repetition length, or cycle length, of 53 days. This means that 53 days in the future from Christmas is when this atmospheric set-up could come back. And when we tally up the dates, we find that the 53 day mark lines up with Valentine's Day. Not a good thing to see.

I will publish more on this developing situation, and will always let you in on the latest in breaking weather, especially with this system.

There does appear to be potential for a winter storm from the 10th of February to the 12th. Let's dive right in.

Model guidance is in fair agreement that a strong low pressure system will move into the Southwest US ahead of a massive high pressure system in the northeast Pacific, just off the West Coast of the US. This storm system will drop further south into northern Baja California in the days after this forecast image, which is valid for the evening of February 8th. The different shades of colors show confidence levels of the NCEP Ensembles as shown on the blue numbers on the legend at the bottom of the image. You can see that the center of this low pressure system has deep oranges, which correlates to 54% probability of the system ending up there- a fair chance this far out. Notice that there is a very zonal pattern across the central and east US. These zonal wind flows (zonal means west-to-east wind flow) typically result in relatively dry and warm weather across much of the nation. I can already see that this type of pattern could result in a very similar set-up as we enter this storm potential period. If you look back towards the West Coast, you will see that storm system pressing down on the pressure contours, as well as another area in the Pacific pushing up on the pressure contours. These are opposing low and high pressure centers, respectively. If we see the low pressure system drop further south and that high pressure system try to bleed east into the Pacific Northwest, it is very plausible we could see the infamous Rex Block formation emerge. 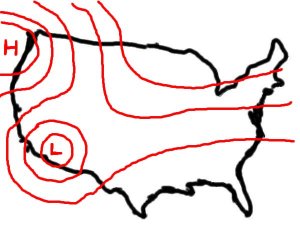 As illustrated in the above image (made by theweatherprediction.com), the Rex Block involves high pressure and low pressure essentially sitting on top of each other. This can happen anywhere, but for all intents and purposes, it has been shown on the West Coast. If you look downstream towards the central and east US, we again see that zonal flow pattern emerging in the East as a result of this Rex Block.

This is the latest European model forecast for the 11th of February. We can see our winter storm is actually in the Plains and shown as the tight gradient of pressure contours just south of the green-ish color in the region. This comes as a result of not the Rex Block (which is present in this image), but an amazingly-strong high pressure system in the Southeast. While many areas would see rain changing to snow in this event, should this storm even happen, the Southeast Ridge could really get in the way.

To be honest, I don't see this Southeast ridge happening. The only way we could see it would be in an extreme negative Pacific-North American index phase. When that index is negative, low pressure dominates the West Coast, and high pressure forms in the Southeast as a result. However, a glance at this and the previous run of the European model shows actually a positive PNA, which supports storm systems hitting the Midwest and Ohio Valley, rather than the Northern Plains. So I do not support the European model at the moment.

The American GFS model has been showing a pretty consistent solution of having a storm system moving out of the Front Range before sliding northeast and impacting the Upper Midwest, portions of the Central and Northern Plains as well as the Great Lakes. While this is nowhere near as extreme as the European model, this American model still does have a Southeast Ridge, although it is weaker than the European's. This is indeed a much more plausible solution in my opinion, with no unreasonably-strong ridge of high pressure in the East, when the atmospheric pattern does not support it.

I will continue updating this situation as the date draws closer.

Andrew
By Andrew at 3:49 PM 4 comments: Links to this post