LRC Aligns for Potential Severe Weather Outbreak in Late May

The Lezak Recurring Cycle does appear to be pointing out a severe weather event in the late May timeframe. Now, the event I have caught is about 40 days in between the event and what is being forecast, and that is just outside the 45-50 day cycle period that has been recognized for this year's LRC pattern, so use with caution.

On April 15, 2012, we had a severe weather event associated with a strong low pressure system, as seen below. 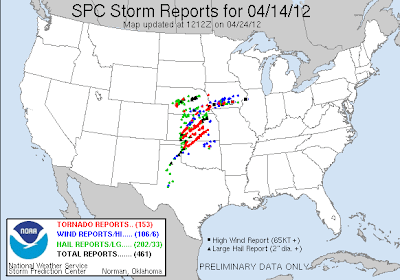 (I do realize that the maps are about a day in difference, but they involve the same system.) A strong storm system had moved east and northeast into the far northern Great Lakes and produced a regional tornado outbreak, mainly in Kansas and southern Iowa into Nebraska. This storm system was below the 996mb mark, indicating how strong it was. Let's take a look at the May 25 forecast off the FIM. 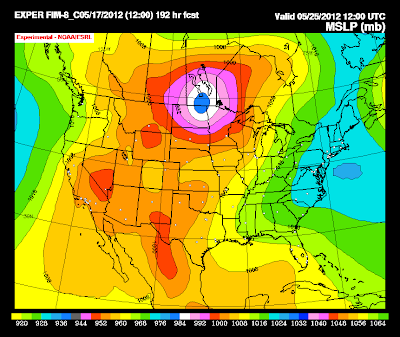 The FIM is showing a very strong system hitting the far northern Plains after coming out of the Western US. Similar to the April 15 event, a ridge of high pressure will be located in the Eastern US, with a warm sector crossing the Plains and Midwest. The difference involves strength and placement of the system, which is to be expected, considering each cycle is not exact to the previous one. That said, if this does match up with the LRC, this is what may happen.

Andrew
By Andrew at 4:14 PM 6 comments: Links to this post