I'm monitoring the potential for a significant snowstorm on April 16-17.

We begin by looking at the GFS model. The GFS model shows a strong storm system dropping down from Canada, taking advantage of the cold air already displaced south in the United States and producing an intense snowstorm in the Upper Midwest. The GFS indicates we may see amounts over 12 inches across northern Wisconsin and upper peninsula of Michigan, with spotty amounts nearing or exceeding 18 inches possible. Given model guidance tendencies to be too snowy/too cold in their forecasts, as well as the fact that models may be overdoing snow because they're stuck in a wintry pattern when we're really transitioning to spring (though the snow falling out my window begs to differ), I'm skeptical of these 18 inch-plus amounts. However, if the storm is as strong as projected, a big snowstorm would be expected. I'm just skeptical of temperature profiles right now.

The NAM model, a short-range, higher-resolution sibling of the GFS model, is actually showing similar amounts. I'm expressing surprise here because the NAM is notorious for over-doing snowfall guidance, in that it can (and frequently does) forecast more snow to fall than what actually does fall. However, comparing the GFS and NAM models, they are pretty similar. While this raises confidence in this outlook, it's nothing to get too excited about. I'm still very skeptical of this event, and I want to emphasize how this has a high 'bust potential' (meaning the forecast has the potential to 'bust', or fail). However, if the forecast ends up to be on target, then I am on board for a big snowstorm. With spring, model guidance starts to struggle due to the pattern changing, and that messes up model guidance. This could be a flash in the pan, or something more.

Shown below is a hand-drawn image of amounts as depicted by the GFS and NAM, for easier interpretation. 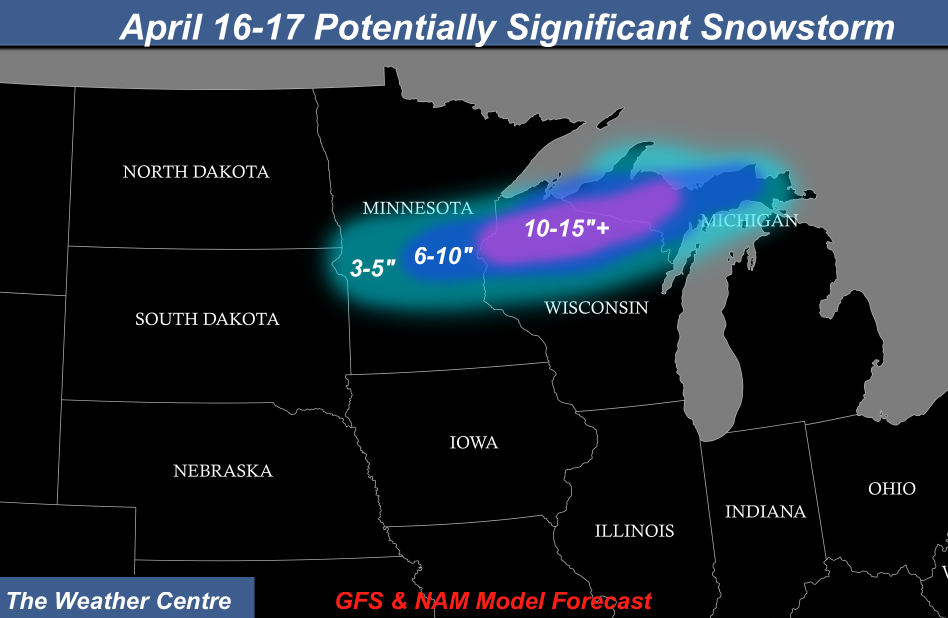 To summarize:
• There is the potential for a significant snowstorm in the Upper Midwest on April 16-17.
• Amounts may exceed 12 inches in many places.
• I am skeptical of this forecast, as model guidance may be too cold and may be forecasting too much snow to fall.

Andrew
By Andrew at 4:24 PM 2 comments: Links to this post