There is potential for a winter storm from March 18 to 20. 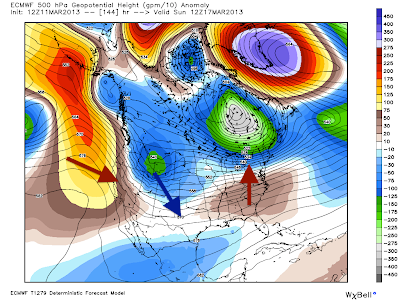 Latest forecast from the European forecast model shows our system entering the northern Rockies in the image above, which depicts 500 millibar height anomalies. Cold colors show low pressure, and warm colors show high pressure. I drew arrows for three masses of height anomalies; if you look closely, you will see high pressure systems are shown with red arrows and low pressure shown with blue arrows. The European model allows the storm system to dive into the southern Plains in the next several hours, as high pressure advances east into the West Coast and another body of high pressure in the Southeast advecting north and smothering the East US, as the next image will show. 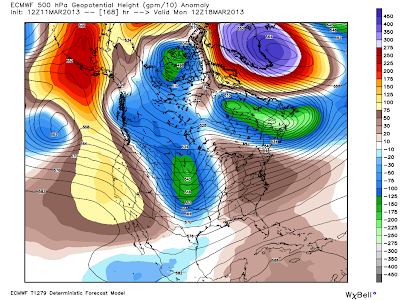 24 hours later, still using the European model and 500mb height anomalies, we see our system has dropped into the Plains and possesses a neutral tilt. For future notice, if the highest vorticity values are pointing to the southwest (southeast), the tilt is determined to be positive (negative). A positive tilt means the storm is not yet mature, while a negative tilt signifies a fully-mature storm system. A neutral tilt means it is close to becoming a mature storm. As the arrow depiction in the above image showed, the high pressure offshore the West Coast has moved inland and is forcing the storm system to move south-southeast. Corresponding high pressure in the Southeast has made its way into the Ohio Valley and East US. 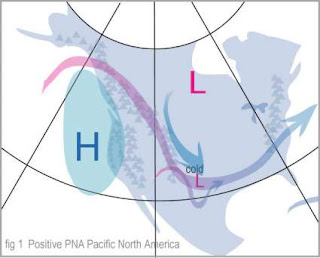 These first two images are showing the textbook example of a positive Pacific-North American pattern. In the positive PNA pattern, a storm system can dart south as high pressure in the West Coast allows the jet stream to take on a highly meridional (wavy jet stream) flow. As the system reaches the Southern Plains in a positive PNA situation, the energy emerges out of the Plains to move either east-northeast or just northeast, as variable high pressure in the Southeast allows for winter weather potential in the Midwest and Ohio Valley. As an example, the Groundhog Day Blizzard in 2011 occurred during a positive PNA pattern, so you get the gist of where storms can go during a +PNA.

The European model is directing this storm very well with regards to playing out the positive PNA pattern at hand, so let's continue with its forecast. 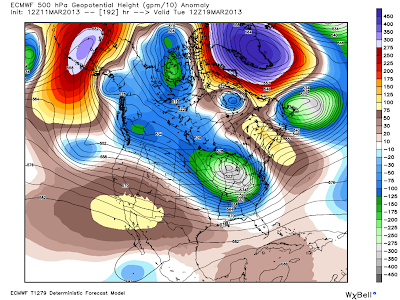 Another 24 hours later, the storm system has moved northeast in a line from central Arkansas to Michigan. It must be noted that the 500 millibar images do not always show where the storm system's actual lowest mean sea level pressure will be. For example, you may think by the above images that the storm system goes from Kansas to Michigan, but analysis of the mean sea level pressure fields shows otherwise. Let's try to piece together how the system went from the Plains to Michigan. A big player in the movement was that positive PNA pattern. It was this pattern that got the idea for a northeast movement started. This track's movement, if it were to verify, would spell a major snowstorm for the Midwest in typical positive PNA fashion. Another player is that high pressure in the Southeast we mentioned earlier. This enhanced the storm's track further to the northeast rather than a more east-northeast track. I'm a little skeptical of how far north the European model has this system go, because that massive high pressure system over Greenland strongly supports that Southeast high pressure system being very much suppressed. I feel that the European model is greatly underestimating this high pressure over Greenland's effects on the storm's track, and if it was corrected, we would most likely see a storm track further to the south that would really hammer the heart of the Midwest and Ohio Valley before transferring to the coast and then threatening the Northeast. If it does go into the East Coast, I can very well envision a big snowstorm for that area, because the high pressure system over Greenland is supportive of a jet stream pattern favorable for a storm track closer to the East Coast and Northeast. This is how Nor'easters can form. 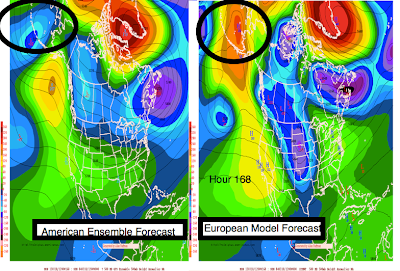 Shown above is a multi-model forecast graphic for the Madden-Julian Oscillation. While some of you may feel overwhelmed by all the action here, let me explain and it should become fairly easy to understand. The Madden Julian Oscillation (MJO) involves 8 different phases. Each phase has different weather effects on the world. The closer the forecast is to the center circle, the weaker the phase of the MJO will be, and thus the effects produced by this particular MJO phase will be weaker. In a similar situation, when the MJO is on the edges of this rectangle, the MJO is in a stronger phase, so its weather consequences for that particular phase will be stronger. Multiple forecast models have the MJO moving into Phase 7 by the time this potential storm rolls around.

This image, courtesy of Americanwx, shows typical 500 millibar height anomalies during Phase 7 of the MJO in the month of March. Again, warm colors show high pressure and cold colors indicate low pressure. If we look towards the Bering Sea, we find very strong high pressure over that body of water when a Phase 7 in March is present. With all forecast models predicting an (albeit weak) Phase 7 of the MJO, it seems like the European model has a better grip on its effects over the American ensembles and other forecast systems rooting against this potential storm. Another atmospheric index that I will not go too in-depth into shows weather conditions that favor the Madden Julian Oscillation in its later stages (including Phase 7), and thus favoring this Bering Sea high pressure.

If we do see that Bering Sea high pressure system, my gut tells me this will be a solid winter storm for someone. A big caveat is that long range models are known to overdo storm systems, and this could be one of those times that this ends up being a weaker event than what current forecasts show. Nonetheless, this certainly bears watching from all parts of the nation, in my opinion.