(Post made on January 10, 2013) Confidence is indeed growing in the possibility of a cold end of winter, starting with the impending polar vortex collapse. Let's see what will get the ball rolling here: 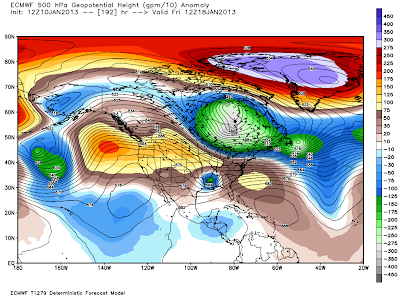 Today's ECMWF model shows the polar vortex being escorted out of the Arctic by a massive high pressure system building over Greenland in a negative North Atlantic Oscillation (NAO) scenario. The vortex appears to be squeezing southeast amidst high pressure in the Arctic and in the West US-Rockies. Recent model runs have shown it bombing out directly over Nova Scotia, Canada, in a situation that could bring insane cold and snow to that region. We want to analyze the situation a little further than just the polar vortex, however. Going back to the negative NAO, it looks to have the highest point of high pressure in the center of Greenland towards the west of that land mass, meaning it could be neutral to slightly west-based. Such a placement of the high pressure would put the most cold and snow over the Northeast US by the polar vortex sliding into the region (more on the cold than the snow). 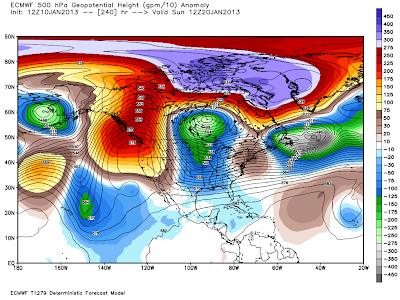 Moving ahead to Hour 240 of the ECMWF model run, we see that the main part of the polar vortex has gone over New England, over Nova Scotia and is now south of Greenland. However, another piece of energy that appears to be related to the polar vortex is present in southern Canada, with below normal height anomalies stretching from that area all the way to the Plains. These below-normal height anomalies signify the potential cold weather that would then intrude upon the Plains, Midwest and east Rocky Mountains. It would be mostly centered in the northern Plains. Note that the negative NAO now has the ridge centered west of Greenland, inducing west-based negative NAO conditions that would enhance potential for cold and storms in that region. High pressure stretching across the Northeast Pacific and West Coast suggests a positive Pacific-North American index (PNA) phase, something that enhances cold weather potential for the Plains and Midwest into the Ohio Valley.

I want to take a moment now and talk about the stratosphere and how the models have been having trouble with the incoming cold pattern. The models already have many issues forecasting here at the troposphere, and thus are bound to have many more problems forecasting conditions tens of thousands of feet up in the air. The ECMWF has been consistent with the polar vortex being pushed out of its Arctic domain and high pressure building over the same area. This would lead to cold air being forced south. Additionally, incoming sudden stratospheric warmings appear in the cards, meaning the cold weather would only be reinforced.

But the big thing i'm really excited about is the already-proven Siberian correlation with North American temperatures. There is a theory that snow cover anomalies in October can form a correlation with the Arctic Oscillation in the following winter. In October 2012, we saw below normal snow cover for the first half of October, hence the warm temperatures in December and mild start to January. However, the middle of October (and especially end of October) brings about neutral to much above normal snow cover, meaning conditions would turn favorable for cold to anomalously cold conditions for late January into February, coinciding with these sudden stratospheric warmings and polar vortex collapse. Since this theory has already been working well this winter, I see no reason to stop believing it now.

Fantastic posts, I look forward to checking them every day. However, it would be great if you could just give us a little information with regard to Ireland and the UK.

Keep up the good work

Hey Andrew will it snow tonight?

is it going to snow in Dixsville? How many inches? should I get a warmer hat?