Let's examine the long range forecast for late April into the beginning days of May. 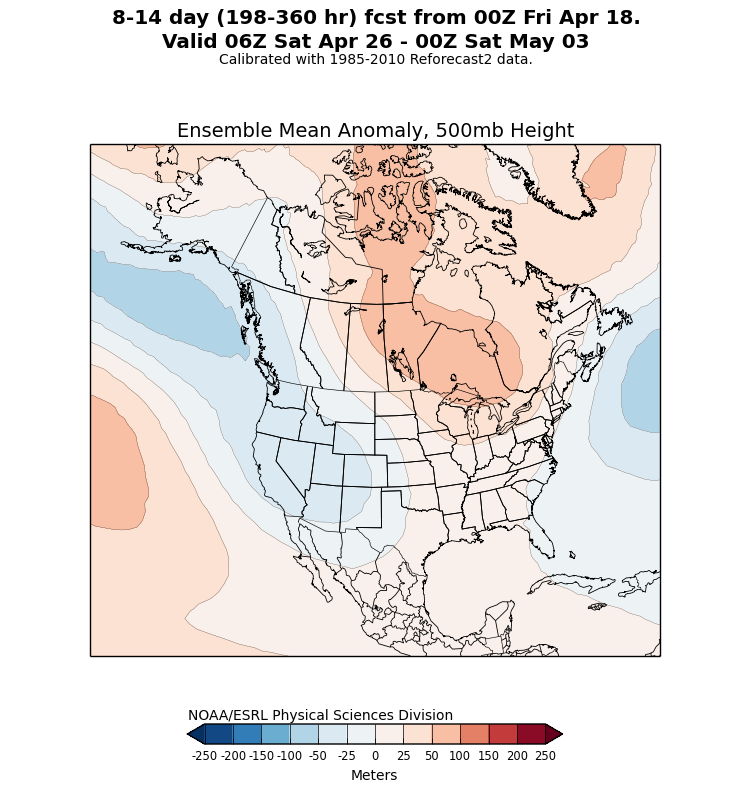 Long range analog guidance from the ESRL/PSD division, a special physics-based meteorology branch of the government weather service, indicates we will see troughing setting up in Western North America in late April as a strong upper level low drops into the Southwest, provoking high pressure out ahead of it in the Central and East US. This ridge out ahead of the upper level low will likely make for anomalously warm weather across the aforementioned sections of the country, a real treat in the face of such a nasty winter.

Beyond the last days of April, it is expected that the weather will take on a slightly cooler tone. In the wake of a Kelvin Wave currently pushing across the Pacific, enhanced tropical convection is expected to develop near the 60E Longitude demarcation, a classic Phase 1 MJO signal. When we see enhanced tropical convection in this Phase 1 signal, it typically means we can anticipate cooler than normal weather here in the United States.

I am a bit skeptical of this cold weather forecast, due to the response we're looking to see in East Asia around April 26th. There is a rule, well explained by Joe Renken, that states a weather phenomenon in East Asia will be reciprocated in the United States 6-10 days later. This means that if there is a storm system in Japan on a certain day, we can expect a storm in the US 6-10 days after that. The same goes for high pressure and warm weather. In this image above, we see projected tropopause pressures, vector winds, and wind speeds way up in the middle-upper regions of the troposphere into the stratosphere. If we look to this forecast image, valid April 26th, and find Japan in the top left corner of the image, we can make out a bulge of orange pushing towards the center of this image. That orange bulge signifies the presence of a Rossby Wave. In simple terms, this Rossby Wave will 'break' over Japan and initiate an intensive warming spell. This may continue for some time, but if it does happen in late April, we would likely see the cooling effects of the Phase 1 MJO hurt, as this East Asian development would likely overrule it.

To summarize:
• A warm end to April is expected.
• A cool start to May is possible, but there are hints that the late April warmth may just carry over into May. More time is needed to investigate this potential.
• A severe weather event is possible in the final 7 days of April, due to the upper level low in the West US.

Bring on the warmth & sunshine!
Happy Easter everyone!
bree

Joe Bastardi sees the opposite of what you are saying. Time will tell.

Andrew, I just wanted to say I really appreciate all of your posts on the weather. I have learned so much from The Weather Centre site. Your posts are well educated and explained very well so people can understand and learn from them. I'm amazed on how accurate your forecasts are. When I watch or read my local weather on an incoming storm I always verify that information with what you have to say because your forecasts tend to be more accurate and broken down more clearly so just about anyone can understand them. Thanks for all your hard work and dedication to the weather!