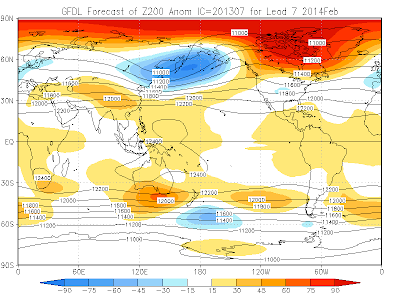 A new suite of long range models has come in, and continues to support the idea of a cold winter for the Central and Eastern US.

The image above is just one of many long range models showing a favorable atmospheric set up for the winter of 2013-2014. You may remember the following five points from a winter post I made a little while ago. While you may frown upon how this information is not 'new', the reason I do not update it is because the information here is still valid, and that's something winter weather lovers should be happy about.
These are the five things I have seen in new long range forecasts over the past week or so.

1. Active East Asian Jet Stream
You will see a tightening of the contour lines in eastern Asia on the image above. This symbolizes the jet stream is under stress, thus increasing its strength in that area. From looking solely at the image above, it would appear pressure anomalies are below normal in East Asia, meaning more storms in that region. If you have been with this blog for a while now, you may recall the times I have brought up a correlation between storms in East Asia and storms in the East US 6-10 days later. If the tightening of the jet stream in E. Asia is due to a stormier pattern in that area, it is entirely possible we see a stormier East US.

2. Ridging Pattern in Northern Pacific
It is well established that the Bering Sea is a favorite place for the origination of sudden stratospheric warmings (SSW's), a phenomenon that involves rapid warming in the stratosphere that then allows unusually cold air to reach the surface and lower latitudes just a couple of weeks later. Last winter, we saw a magnificent SSW originate from the Bering Sea, and other warmings attempt to take place in that same vicinity. With positive height anomalies stationed over the Bering Sea, intrusions of warm air by these positive height anomalies into the Arctic are more easily accomplished, thus increasing the likelihood of SSW events. Once again, this feature has been displayed on multiple forecasts for multiple months now. Additionally, bear in mind that these features were in the forecast when the CFS model was projecting a very cold winter. In my opinion, it could very well be that the CFS is flopping around with its temperature forecast, as is customary of long range models, while the upper level atmospheric flow really tells the story (i.e. the pattern really is favorable for cold weather, even though temperature forecasts do not reflect it). This issue may occur with other models as well, though I have yet to document such an issue in-depth.

3. Ridging Pattern in Western North America
The image at the top of this post displays a widening of contour lines in western North America. When you get the expansion of these lines, it is typically demonstrative of high pressure anomalies present in the area. The presence of high pressure anomalies in Western Nor. America is defined as a positive Pacific-North American index (PNA) pattern. In response to high pressure in the West US, low pressure (and thus cold air) is favored in the Central and East US. It is also known that a positive PNA results in winter storms taking a track favorable for the Midwest/Ohio Valley to receive snowfall. Yet again, the June CFS forecast identified the +PNA pattern for this winter, just as the current forecast shows.

4. Low Pressure in Eastern North America
This is kind of an extension of Number 3, in the sense of a low pressure response to positive height anomalies across the West US due to the positive PNA pattern. The new long range models are picking up on those low pressure anomalies, though some are reluctant to allow the anomalies to stretch into the United States. I believe the low pressure anomalies do actually stretch into the US, but because the forecasts are averaged out over time periods of months at a time, the anomalies are not shown correctly.  The reason why the models may be reluctant to do that on the image above is because we could see high pressure in the Bering Sea work against development of the +PNA pattern, thus preventing low pressure anomalies from reaching the US. However, we could also see the Bering Sea positive height anomalies combine with the +PNA in a favorable winter pattern.

5. High-Latitude Blocking Pattern in Greenland
The image above shows an expansion of contour lines towards Greenland, an indicator that high pressure anomalies are favored in that area. Positive height anomalies in/near Greenland results in the negative phase of the North Atlantic Oscillation. The North Atlantic Oscillation (NAO) is a phenomenon that involves height anomalies across Greenland. In the negative NAO, high pressure is stationed over the land mass in a move that permits cold air and Nor'easter's to affect the Eastern US. On the other hand, a wintertime positive NAO results in a warmer United States with lower probabilities of big snowstorms for the nation as a whole. I brought about the theory that averaging out one to three months in a forecast may not project the real picture, and that theory also applies here. It applies here in the sense that the NAO may be very negative at times, but may also be less negative during some times. The tendency for a more negative NAO over a less negative/more positive NAO for this three month period in winter may then lead to pressure anomalies averaging out positive over Greenland (a sign of the negative NAO), thus showing an expansion of contour lines towards that region.

With many global models continuing to support the five points above, the case continues to build in favor of a cooler than normal winter in the Central and East US. It will be critical to this cold winter theory that we see these five points continue to show up in future model forecasts through September and October. If we can still find these five items in long range forecasts by October, there would be little opposition for these five points to actually verify, and this little opposition for a cooler winter.

it looks almost as more of a zonal flow across the US as compared to a pronounced ridge/trough.

For years I have read and watched the data over at the the NWS-Climate Prediction Center and this year the long range has said for months that we will have a mostly dry and warm winter and the lastest data supports that, while I do hope they are wrong and really hope and pray your data is right. But,.... the long range and long leads forcast over at the CPC have not changed and has been steadfast for the past several months......as we all love to say.....Time will tell.
As a footnote I love this site,I have been coming here for several years now. I have learned a lot and look forward to your posts each day! Thanks for all you do!

So the western US can expect drought conditions to worsen? Or will there be storms from time to time. Thanks again for the knowledge you provide.

Anonymous at 7:43: It may look zonal because it is averaged out over a month, when in reality the heights will end up more exaggerated than what is shown.

Frank-o: Considering the CPC always calls for a warm and dry winter, I don't take much stock in their forecasts. Appreciate the footnote, by the way!

Anonymous at 11:52: There will undoubtedly be storms from time to time, but any pre-existing drought conditions may be enhanced if current forecasts verify this winter.

What do you think the high and low temps will be like this winter in the central plains?

If I kept sending the same comment, it was only because I did not see the statement that my comment had to be approved by the blog author before it could be seen!

Why do people on this blog want a cold winter. Do you like paying high energy bills? Snow Christmas and then be warm.

Some people like snow, to me it is a great source of money, but so is warm weather too.

Why do I/We Love Winter. I can only answer for my wife and me. My wife & me are "Winter Dogs", we love everything about it! As far as high engery bills, we do not have them! We have a very tight, well insulated house, attic has over 16 inchs of insulation, floor has 12 inchs, my outside walls are over 6 inchs thick, double insulated windows. You can heat my house with a match and cool it with a ice cube! LOL...(;-)

I cannot say I love the very cold, & I do hate snow unless its on Christmas Eve/Day!
I cannot say I like real hot/muggy weather either, I need a happy medium!
(limited rain)!
bree

@Indy Picker when it's hot most people use air conditioning that porbably adds up more money than heating bills, as I just use a blanket.