There is a 20% chance of tropical cyclone formation for a system to the east of the Central America region.
Upper level winds are now becoming less favorable for development for this system, and already, the showers and storms associated with this system almost look to have abandoned the center of the system. 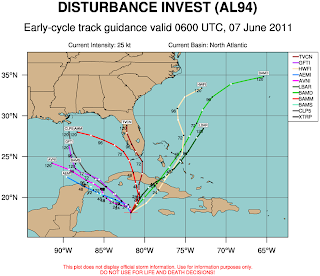 The track of this system has reached a good consensus of two solutions. One solution is for the system to be thrown out to sea. The other is for landfall around Louisiana.
To those concerned about landfall in Louisiana, this system will not be getting any stronger in it's lifetime. 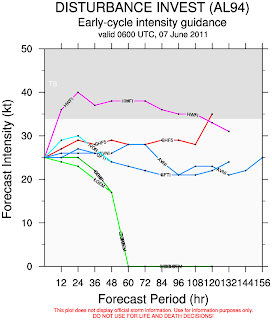 A couple of models have altogether dropped out of the intensity forecasts, and the models that stayed keep the image of a non tropical storm low pressure system. The one model that does make a tropical storm is wrong.

I expect this system to dissipate, and this will be the final discussion issued for this system. However, daily discussions will still be issued.
By Andrew at 8:17 AM